As of late August the data logger shows we're having cool evenings at the vineyard. Nights are averaging around 9 degrees for lows. We even had a 3.8 low on the 24th of August. Kelowna had the same at 3.7. The grapes and vines are doing well but ripen slowly. There has been about 1 inch of rain since July 25th but the vines are healthy.

The Ravat 34 continues to do well (pictures below) and on track for end of September harvest. 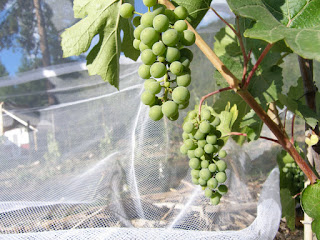 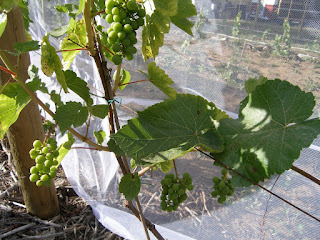 The Leon Millot is also doing well but some vines have much more vigourous growth than others. The Agria has come along well in the last month since pinching off the laterals, with most of the vines at the 4 foot level and all the vines survived (picture below). The regent is slow but a few more vines showed growth and there are now 7 of the original 14 vines that are alive. 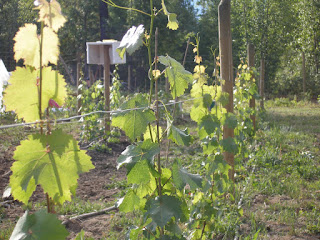 The Castel planted this year are doing well, many are up beyond the 5 foot wire (picture below). 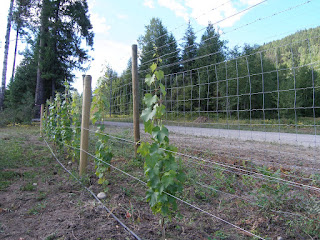 The Blattners look good also especially the Cabernet Libre, as they have caught up and passed the growth of the Petitie Millot and the Cab-Foch. The ortega are slow, poor growth as are the Pinot noir.
Posted by The Vine House at 5:14 PM