So we have a short row of sovereign ruby vines to see how they grow and to see just what kind of grape and juice they produce.  Have to say we've got a bit of a soft spot for those grapes created in Canada and now we have one created in each of the key wine regions in Canada. L'Acadie Blanc was created in Ontario, Evangeline created in Nova Scotia, Vandal Cliche created in Quebec, and Sovereign Ruby created in British Columbia. And you've got to love the regal name "Sovereign Ruby",  It reminds one of the "Black Prince Ruby" in the Royal Crown (which in essence is a sovereign ruby).

To be specific, Sovereign Ruby (the vine) was created at the Summerland research station in British Columbia as a cross between Bath and Pearl of Csaba and was known as Summerland 82 before being named Sovereign Ruby.  Not much is known about the grape and juice except that it was similar to its sister vine Sovereign Rose (Summerland 80) which is of the same crossing.  There is some other data that says it is a pink grape, with small clusters, that has a nice muscat aroma and good juice chemistry for wine making. Given that one parent is Pearl of Csaba these qualities fit. Not exactly a vinifera but then again the "Black Prince Ruby" is not exactly the gemstone of its' namesake (Psst - its not a ruby). Hopefully desease resistance and cold hardiness was imparted by the other parent - Bath.  Its also supposed to be quite vigorous and given the growth so far in our "sand" I would agree that it is.

It was created as part of the same Summerland Research Station breeding program from the 1970's and 1980's that produced hundreds of new varieites and created Sovereign Coronation (Patricia x Himrod) the popular seedless blue (fresh eating) grape. It also produced Sovereign Opal (Marechal Foch x Golden Muscat) the awesome white grape that is grown and vinified into outstanding white wine at Calona Vinaeyard in BC.  Really - if you have not tried Calona Vineyard's Sovereign Opal you need to keep your eye out for this one - especially for summer patio season. Unfortunately most of these grapes that were created in this program were pulled out, never got recognition and have been lost - but we're glad we found this one alive and we will see how it does.

Our vines are just into year two and they all wintered well, are growing well in our "sand"  and have produced several flower clusters on each vine. We've pinched all flowers off except 1 cluster on each vine.  Probably should just pinch them all off but I'm really curious as to the flavour and ripening time.  Although a second year vine won't really give the best example of ripened fruit, we will get a rough idea of timing and flavour.

No pictures yet but we'll cover the vines with netting and update the harvest chart with the data in the fall.
Posted by The Vine House at 6:49 PM

So we have been growing the vines at Arrow Lakes Vineyard with the very least amount of water we can.  We tried zero irrigation and wanted to rely on rain fall alone and while that seemed like not a bad idea given our very short growing season, we could not make it through the super hot summers without severe vine stress especially when some days are seeing the temperatures getting above 35c.

The alternative was to have very low crop loads to the level that would not be economical.  So we widened the space between rows a bit from 6-7 feet to 8 feet and installed drip irrigation that is active only during the hottest periods when the vines could get damaged by water stress. The wider rows gives the vines a bit more area from which to draw water from the soil and we turn the minimal  irrigation on for a short period generally between July 1st and August 31st - so just to get the vines through the hot periods.

The most important factor we have found to limiting the irrigation we need to apply is through eliminating the weeds and growth between rows.  The fact is the monashee area actually gets some decent rain fall throughout the summer months - significantly more than the Okanagan gets.  However, the rain that does fall has little chance of being utilized by the vines if it is intercepted by weeds or grass between the rows. 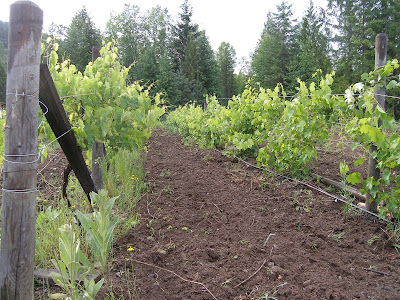 So to eliminate weeds we have relied mostly on solarization and cultivation between the rows.  We do solarization between the rows by applying clear plastic (same type used for vapour barrier on houses) between the rows. The roll is 12' x 175' so we cut it to 6 foot wide and we can do two rows at a time. You lay the palstic down and shovel dirt along the edges on both sides and a bit in the middle so it doesnt blow away.  Then the sun bakes the weeds underneath and after about 3 weeks there are no more weeds.  Then we move the plastic to a new row.  Its a bit labour intensive but the effects are so good that the rows will remain weed free for years. 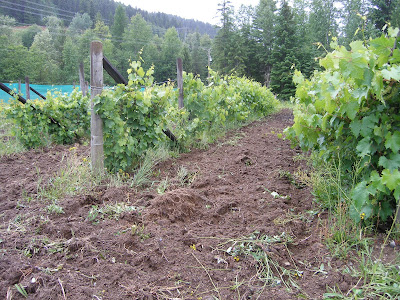 To compliment this we do regular cultivation in the spring, early June and early July then thats it, no more required.  After that point its too hot and dry for weeds to really get going. Some weed eater work under the vines keeps the bigger weeds and grass in check also.

So with the weeds in check the rain that does fall doesn't require much in the way of suppliment from the irrigation.
Posted by The Vine House at 8:42 PM

Earliest Grape Bloom Ever in 2016

So we were way ahead at the beginning of May with bud break 2-3 weeks early and that trend has carried on through to grape flowering bloom.  Our grapes usually bloom sometime between the last week of June to the first week of July with two years exceptions being as early as the 20th of June and then as late as July 11th.

This year we are blooming between June 7th and 15th.  As of the 11th all varieites except Ravat 34, Seyval Blanc, Evangeline and L'Acadie Blanc are at least 75% in bloom.  These last four (all white grapes) are just starting to bloom.

Here are some of the varieties;
Leon Millot - dependable, could crop this one a little higher 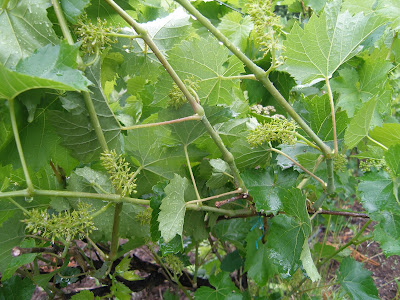 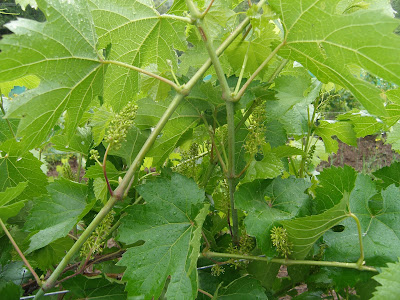 Castel - finally taking off with the right combination of nutrients, water, and crop load 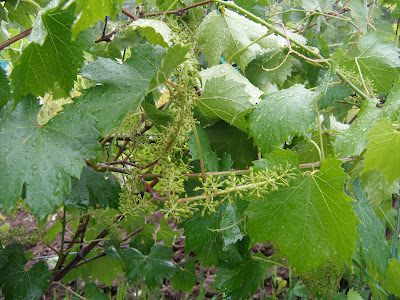 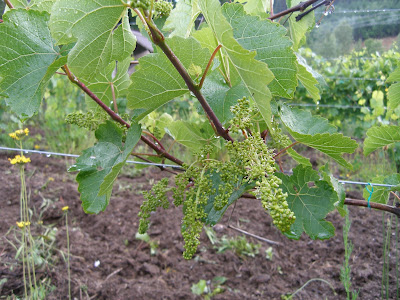 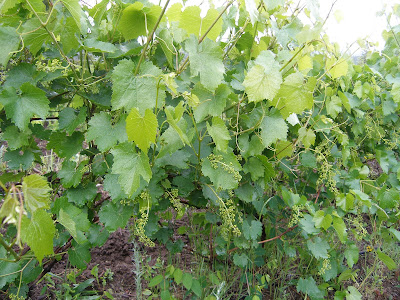