So I took these pictures on August 5th to show how the grapes are coming along.  The reds really are doing quite well so far this year and its because they flowered before the heavy rain hit in mid June.  The whites are not doing as well with Ravat 34 and Petite Milo doing the best of the bunch and L'Acadie and Evangeline equally poor in fruit set this year.  Petite Milo and Ravat 34 did pretty good but again they were flowering earlier with the reds and not during the rains. There were just a few red grapes just starting to show colour on Aug 5th but most were close to bunch closure and as of Aug 12th many more are starting to turn colour on the earliest varieties like Colmar, Castel, and Leon Millot.
Leon Millot Aug 5th 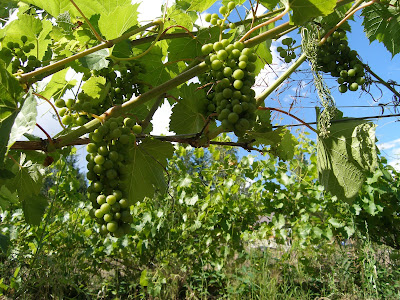 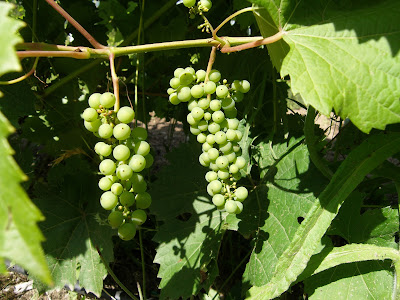 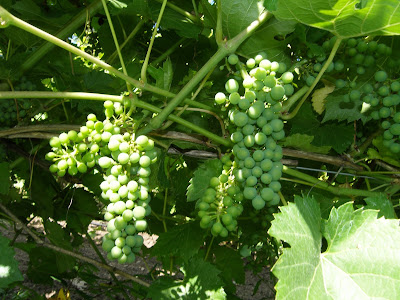 One of the things people ask when they see hybrid vines is what kind of training system are we using.  We actually use a few different types depending on the vine and other variables including the growing style (uprights or sprawling) and the clusters size (production per shoot). So much depends on the growing style of the vine and the shoots per foot that we need to have in order to have a decent crop load.

For instance the L'Acadie Blanc, Ravat 34 and Evangeline all have good sized clusters varrying in size from 120 to 200 grams. So if we take L'Acadie blanc for instance, in order to get about 1-1.5lbs per foot of trellis space you only need 5-6 shoots per trellis foot at 1 cluster per shoot.  The L'Acadie grows straight up like an arrow and is great for positioning the shoots in the wires. So because we only need 5-6 shoot per foot and they grow upright then we use a verticle shoot training system.  Same for the Ravat 34.

On the other hand Leon Millot produces very small clusters of approximately 45-50 grams on average (sometimes 60 grams).  Most shoots have 2 clusters so you get about 100 grams per shoot.  This means you need 6-7 shoots per trellis foot to get 1.5 lbs per foot.  But if you leave only 6 shoots per foot some of the shoots will grow at least 6 -7 feet long so clearly the vine could support the growth of more shoots. As such we crop at about 8 shoots per trellis foot and the growth is quite balanced at 24-26 shoots per meter. The diffference now is that at this density the shoots can become too dense (leaves from one shoot end up shading the leaves from another shoot) so we need to split them up and as such we use a 4 are kniffen style.  But we do this with canes not cordons.

Our 4 arm kniffen style usally has 4-6 canes in total per vine with 2 lower canes wrapped to a 2 foot wire and 2-4 upper canes wrapped to a 3.5 foot wire and vines  are spaced at 5 feet in the row. Ideally this means each vine has about 40 buds each (8 per foot over 5 feet) producing 100grams of grapes (2 x 50 gram clusters per bud). So production of approximately 4000 grams over 5 feet. So thats 800 grams (1.7 lbs) per trellis foot.  We target 1.5 lbs per trellis foot for Leon Millot and this cropping level seems to meet that as sometime you only get 1 cluster per shoot and that brings the per shoot average down. Other vines could crop higher like Triompe D'Alsace, it could have 10-12 buds per foot but would be way to dense on a single canopy - this many buds per foot would have to be configured on some type of divided canopy like a geneva double curtain or lyre trellis style.

The the other factor with this density is that if you position all the shoot upward then they will still crowd each other so with the 4 arm kniffen they are also allowed to spread out into the area between the rows.  Leon Millot (and most hybrids) vines don't grow staright up also so this fits well with their growing habit and even at 8 shoots per foot you will still get crazy long canes so we are always walking the rows and pinching back the shoots when they get up to 15 leaves in length.

One thing to note is that there are lots of documents that will tell you about pruning styles and how many buds per foot to have for certain varieites but less is known for hybrids.  So use these as more like suggestions rather than guidelines especially as you are starting out but understand that you need to figure out whats best for the variety you have in the soil and climate conditions you have and in relation to ripening the fruit within the season you have. You need to grow the vines with different bud counts and training systems over a few years to figure out whats right for your location.

For a few years we experimented with different styles and bud counts in the same row and after two years quickly figured out whats best.  Having said that, we changed things in the past 2 years with irrigation and fertilizer and now that has changed the growth of the vines (more vigor) and as such we have been working on modifying the bud count and the training system as well.

So we planted 2100 row feet of Leon Millot vines and Marechal Foch vines in the spring and we planted then quite deep into the ground so that they have more moisture.

All the vines are doing well and growing but a bit slow to take off as they really didn't get going until recently.  I think planting them so deep slowed their growth but they all look healthy.

Here is a few pictures of the new vines....in the first picture you can see the test vineyard in the background. 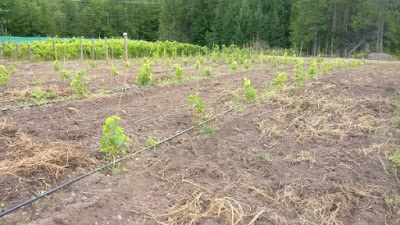 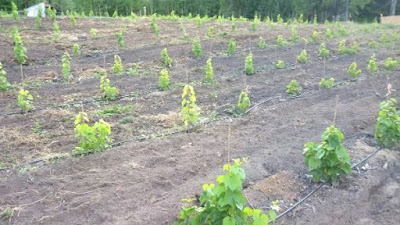 So one of the first things we did years ago when we started the experimental vineyard was to test the soil.  So we took several soil samples from various locations in the vineyard and from various depths surface, 6" and 18".  Generally speaking the soil came back as being devoid of virtually any organic matter or nutrients but the ph was ok in the 6.5 range and most trace elements existed in sufficient quantities.

Well I've read in so many books that grapes like poor soil but I think thats a guideline (like the pirates code) because what is poor soil? What makes a soil good or not good - it  is a pretty general assertion. So with the numbers we got back from the soil test we new we did not have "good soil" in fact if there was an arbitrary spectrum of soil between good and poor soil we would be the poster child of poor soil fore sure. The only thing that would have made it worse was a lower ph.  But our ph was between 6.5 and 7....so right in line with what one needs to grow grapes. Anyways as we had read in virtually every publication that grapes love poor soil we didnt bother to do any amendments (didnt add fertilizer, manure etc.) to the soil for the first 5 years or so.

Well we didnt get much growth or production from most of the varieties.  What is remarkable though is that the Leon Millot and the Ravat 34 (in particular) actually did amazingly well in those conditions AND without irrigation I must add.  Other varieties like Seigerrebe and Pinot Noir hardly grew at all and didnt put out a grape until just recently - they looked like some stunted sub-arctic tree. So as I mentioned before its a pretty general assertion to say grapes like poor soils - its like a bad practical joke someone decided to play on anyone who hasn't grown grapes before.

To the contrary, Id say for the most part grapes don't like poor soils, the ones we grow anyways.  Like most crops they do need water and they do need nutients so make sure your vines get both. I grew our vines in quite poor soil for a few years thinking that this was what they would do well with but only a few liked those conditions.  We added water and that helped a bit but not that much. As soon as we added a bit of water and nutrients virtually all varieties improved dramatically.  With 5-6 year old vines we went from producing approximately 0.33-0.5 lb grapes per linear trellis foot to producing 1-1.5 lbs per trellis foot (up to 2lb/foot for some varieties).

Perhaps the best (LOL) part about all of this is that we started the test vineyard on the piece of land that was easiest to break up.  It had no trees but a few small poplars and pines.  The rest of the area around this part was heavily treed and would take tremendous effort to clear and prepare for planting so this area being mostly cleared was chosen.  Looking back I have to wonder why there was nothing growing there and now I know it was because the top soil there had been stripped away due to the logging operation that went on decades earlier - poor soil at its best. If there was no trees growing there I should have known that the grapes wouldn't do any better - live and learn and pass the message on. Make sure your grapes get some nutrients and water right from the start

Good news is now that we've cleared the rest of the land we see that the soil elsewhere is quite good, with lots of nutrients and organic matter.  The new grapes planted in these areas are thriving.