So the grapes are developing well and looking good as of August 24. We had to net the grapes as the birds and wasps were already getting into them. The Evangeline are already high in sugar and we "lost" alot of them to our farm hand Mike who helped net the grapes this year. The Foch are about 85% coloured up and Leon Millot are 95% coloured and overall thisng are looking good. The Ravat again are outstanding and looking forward to making wine with these ones again this year.
Here is Evangeline 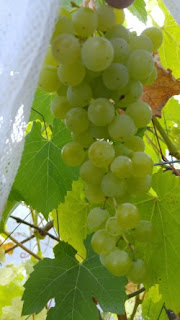 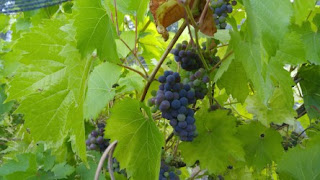 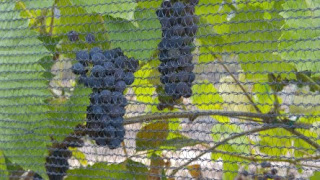 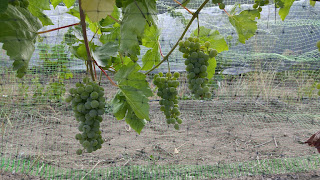 So its been the hottest and the dryest summer we have ever had. The grapes are still good but the vines are suffering from the drought a bit. One of the things we do at Arrow Lakes Vineyard is cultivate between the rows to eliminate the weeds. Then we allow a small strip of weeds and grasses to grow right under the vines. This is in stark contrast to many other vineyards that have grass between the rows and clean strip under the vines but its a vineyard practice that has been successful in many organic based vineyards.

We are not a certified organic vineyard but we have been practicing pretty much organic style of farming not unlike the way my great grandfather farmed over 100 years ago.  He didn't have spray for fungus or insects or weeds, just the plow to keep the weeds down. So far the practice has been good for us as this is the 10th summer of growing grapes and we have not had a bad insect or fungus problem.

Not to say we haven't had some insects attack the vines but the grass and weeds that are allowed to grow up into the vines has also allows for a mini ecosystem for spiders and other preditory insect that keep bugs like leafhoppers to a minimum. As for fungus, we have occasionally had a touch here or there but what we have had has not been problematic as most of the test vines are fungal resistant - so we haven't had to spray for fungus. 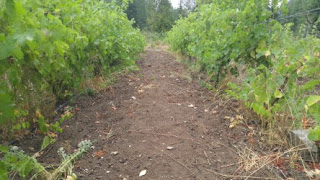 The value of cultivating between the rows has eliminated pretty much any competition for water from weeds or grass. Any water in the soil or that happened to fall goes pretty much straight to the grape vines. So we need very little in the way of supplimental irrigation.

Not to say this could all fall apart, we could get a bad insect attack or huge fungal pressure some year(s) - you never know what the next year could bring but after 10 years so far so good.
Posted by The Vine House at 6:08 PM

Forest Fires & Drought Conditions But We Are Still OK

So the summer has been very hot and dry and with serious forest fires. We just got 1cm of rain on August 14th but that makes it 2 months since last rain and July was by far the hottest month we’ve recorded in 10 years. The good news is the vines, while stress are still doing ok and the fruit is developing. Some of the grapes are smaller than usual but no fruit dropping and overall it looks good.
We have drip irrigation for each vine but the amount are so low as to be sustenance really so the vines are getting water from the soil. So this is where cultivating between the rows has really paid off in this year in that the vines have no competition from weeds or grass for the water that is in the soil.
None of the vines are dropping fruit and the Leon Millot and Marechal Foch look good and the Leon Millot is just turning colour. Triompe D’Alsacce also is doing good and Castel is holding its own. Marquette, Regent, St. Croix and Precoce Noir are struggling in the heat and drought. For whites the Ravat 34 again is doing great, it does like the sandy soils and has a tremendous tap root. The Petite Milo and Evangeline are also doing well. L’Acadie Blanc is having a tough time in the droughty conditions.
Here are some of the grapes as of Aug 13th
Triompe D'Alsace 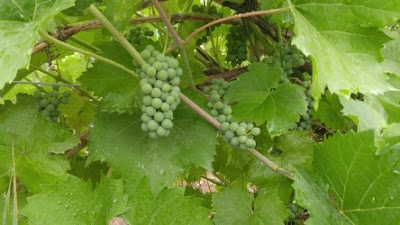 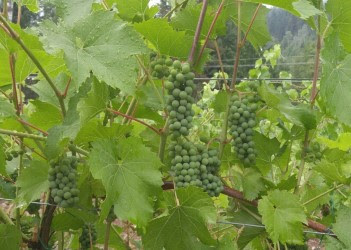 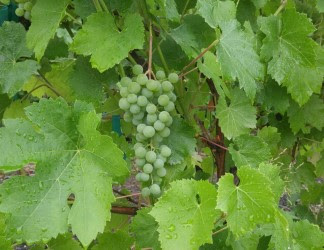 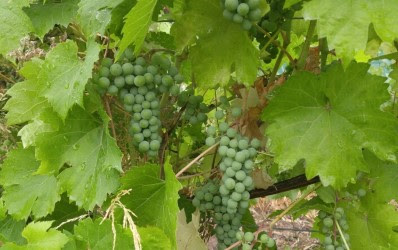 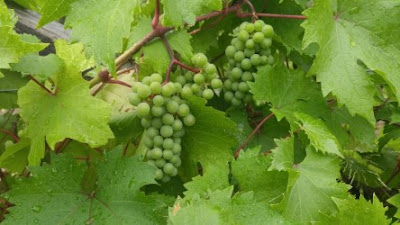 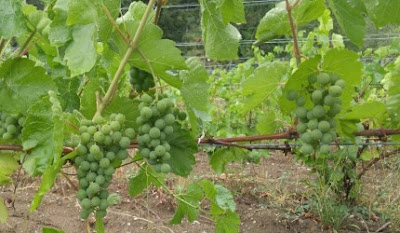