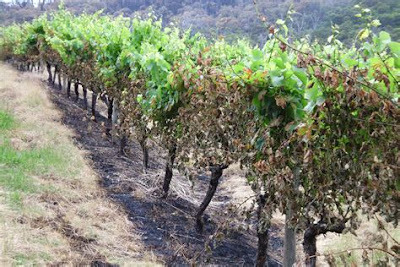 One of my favorite Canadian wines comes from Conviction Vineyard and Winery in British Columbia. This wine is a variatal made with the Sovereign Opal grape and quite simply it tastes awesome but there is so much more to the story of this wine. This goes back to my last blog about the story behind the wine, or art, as I drew some  comparisons. Since then I had a few people ask about the wines I like and this one immediately comes to mind.
This is a friendly summer time wine, muscat fruity, slight residual sugar, and always well balanced in acid. Perfect for summer time patio sipping but equally matched to fish or seafood and Indian spice dishes. I've enjoyed this wine for many years and discovered it when the winery was known as Calona Winery. The winery has been rebranded as Conviction winery and year over year this wine is made perfectly and consistently. This wine has medalled so many times at national and international wine competitions and for those who have enjoyed it you know why.
So hear is some other really interesting details about this grape. The only place in the world that Sovereign Opal grape is grown commercially is at Conviction vineyard winery in BC.  So this varietal wine is rediculously rare. This green hybrid grape was actually "born and raised" in British Columbia. It was created to be a cold hardy wine grape as a part of a government grape breading program in the 1970s by crossing Marechal Foch and Goldmen Muscat varieties. Another grape that came out of this breeding program was the popular blue fresh esting grape Sovereign Cornation that is widely grown in BC.

Arrow Lakes Vineyard is testing the variety Sovereign Ruby (see link), a muscat variety also produced through this breeding program. Pretty interesting pedigree behind these grapes and particularly the Sovereign Opal wine and to me that makes this wine even more likeable.
Posted by The Vine House at 8:46 AM