As of August 20th we are about 1-2 weeks behind where we should be at this time of year.  Of course we've only been tracking the climate for 5 years so this is yet just another estimate.  Having said that compared to the cool year we had last year we are for sure a few days if not a week behind where we were on August 20th, 2010.

However, the vines are growing well and the grapes are filling out.  There has been some bunch closure on the Leon Millot 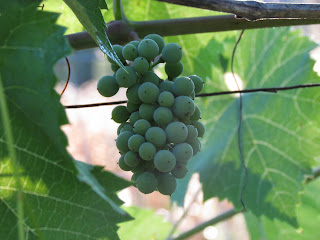 and the Ravat 34 is comming along nicely. 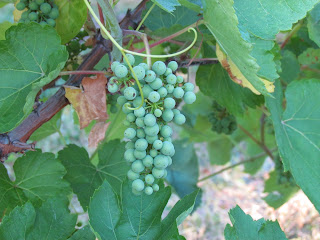 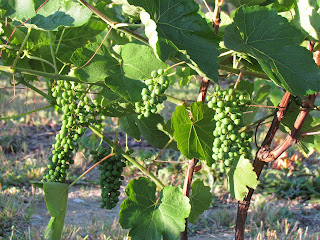 The month of July was about 1 degree cooler than normal and we had double the rain so about 5-6 inches.  This presented some fungal pressures and most of the Kuhlmans are showing very slight powder mildew on the leaves and the Leon Millot and Lucy Kuhlman showing a little on the berries.  The first two weeks in August were warm but the third week was below normal in the day and night temperatures.  We experienced a 3.4 degree low on the 18th of August, however,  this is not unlike last year when we had a similar low around the same time.
The Colmar Precoce Noir and Lucy Kuhlman are just beginning to show some colour change on a few berries and should be into veraison this next week.  ﻿The long range forecast into the first week of September shows temperatures above normal to normal with little or no rain.  This is good but some more heat later into September and an extra week or two before frost would be great.
Posted by The Vine House at 6:44 PM

Petite Milo is one of several recent hybrids created by Vladimir Blattner of Switzerland.  This variety has several very positive traits including being cold hardy, disease resistant and early ripening.  I can not find specific data on how cold hardy it is but we have had Petite Milo now for three years and the first winter we had it we experienced a -25c and we still had bud break from the cane the next year.  However, there was several feet of snow over the cane.  In comparison I'd rank it similar to Leon Millot.

It is very disease resistant to the typical mildews and has shown no problem on leaf, canes or berries over the past few years. This follows it's performance at vineyards on Vancouver Island and the wine islands.  It buds out early and could be a problem at sites prone to late frosts but at out site it seems to bud out with Leon Millot and not as early as Castel.

It has strong vigorous growth, and is somewhat trailing in habbit rather than having classic upright growth.  The leaves and canes are reminiscent of kuhlman hybrids (Foch. Leon Millot etc.).  The grapes are small as are the clusters, two per shoot, but I've heard from the supplier that there can be more.

The variety is not an over producer but apparently consistent and will ripen its grapes in very short seasons less than 150 frost free days. However, like Riesling it can be harvested early in this time period or left to hang and continue to ripen.  Grapes can attain high sugar of 23-24 brix, but a little less is common in the shorter season.  This is among the best sugar accumulation for such short season white varieties.  The resulting juice chemistry is good for making wine.

I recently tried a Petite Milo/Epicure (epicure is another Blattner variety) blend that was crafted by Paul Troop of Salt Spring Island. The wine had strong tropical fruit aromas and flavour reminiscent of Riesling and Gewurztraminer.  I've been told this is what the variety should taste like, perhaps a little more Riesling like.  In any event the wine was excellent. It also received a silver medal at the all Canadian wine competition. 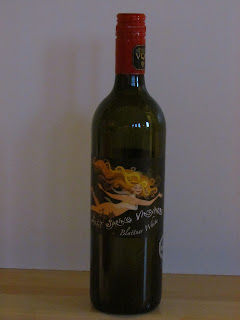 I am impressed with this variety so far.  It is the best of the three Blattners we are growing, (Petite Milo, Cabernet-Foch, Cabernet Libre) for our site and look forward to seeing how the grapes come off the vine this year.  We've got about 15 clusters this year and this will give us an idea of ripen times and sugar/acid balances in our short season.
Posted by The Vine House at 5:48 PM