Warm Spring - Understatement of the Century

I mentioned in a previous post that this spring has been really warm.  We saw that the vines were already starting to push with scale crack stage in mid-March.  In early April we have seen the vines at the stage just before bud break and for Arrow Lakes Vineyard this is what we usually experience at the end of April.

So I wanted to see just how this April compares to other "Warm" April temperatures and looked through the data that Environment Canada has for the Kelowna station.  I went back to 1899 and found that there is data for each year but that the station location has moved a bit, but not to far from present day Kelowna Airport location.  This has some importance because when comparing year over year you want the same location to mimic the same conditions etc.  (A low spot can attract cold air, closer to the lake has a moderating effect etc etc.)  The differences that noticed from location to location dont appear to be that magnificent.

So here is what I found.  The normal average for Kelowna Airport is approximately 8.4 celcius for the month of April.  The warmest April on record that I could find since 1899 is in 1934 with an average of 11.4 celcius.  I've put the five warmest Aprils since 1899 in the table.

So has April 2016 been warm?....are you ready for this.....we are on target for an average of 13.0 for April "WOW".  Forget "warm"  this is smokin' hot and consider that the normal May average for Kelowna is approximately 12.9 explains why we are 2-3 weeks ahead. See the table below.

I googled "earliest bud break ever 2016" and it would appear that from California to Kelowna bud break is way ahead and the earliest ever recorded in many locations.

So its hard not to talk about growing grapes when you are passionate about that kind of thing.  So when a teacher asked if I could provide a presentation to the class I was thrilled.

Was a bit of a history lesson (how they use to process grapes in ancient times),

bit of geography (where grapes are grown in Canada), 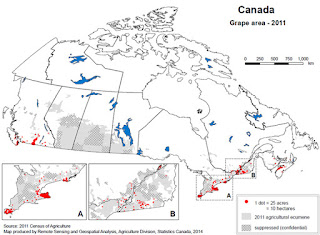 bit of business and agriculture and grape products.

Best part was showing the students how grape vines grow in a vineyard and how to propegate grape vines.  Each student got to help plant a grape vine cutting and now with any luck these cuttings will root and each student will take a vine home with them at the end of the school year. They are starting to bud out nicely!! 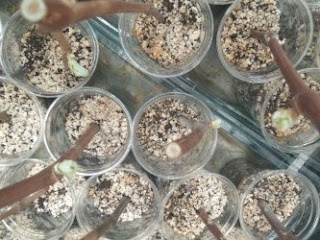 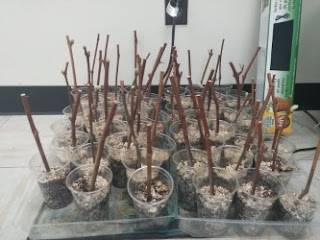 Early Spring Again - Dont Get Your Hopes Up

The vines that I have pruned are bleeding sap like crazy (see photo) so they are well on their way to bud break.  In checking the vines they all look really healthy and cutting into the buds they also look healthy with a high winter survival rate.  The only one that was not great was the pinot noir as it shows lots of fungal pressure on the canes.  This is foresure a carry over from the fungal pressure we experienced on the pinot noir last summer.  It was the mildest winter that we've recorded yet with coldest temp being -15c and as of March 31 it was 22c in the vineyard.  So in all there is a strong likelihood that we'll have allot of healthy buds and flowers this spring. 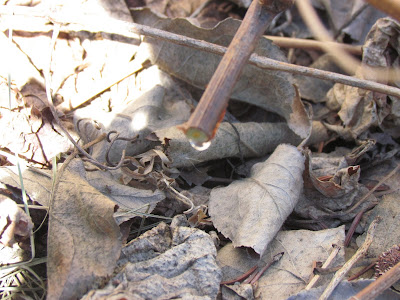 The down side - seems that there is never the perfect year, there is always something to contend with.  If you get a mild winter, good bud survival and lots of fruit, lots of rain and heat in the summer and you thought it was going to be the best year - then you get fugal pressure.  My concern with the early spring is that the vines push buds too early and then we get a late spring frost that kills them all.  Time will tell. Fingers crossed in the mean time.

Prepping for the New Vines

We are planting 2000 row feet of vines this year, mostly Marechal Foch with some Leon Millot and we spent the last few days staking out the rows and plots for the vines.  Of course if the piece of land we were working on was a perfect square then it would be really easy to measure the row distances from the edge and plot each accordingly - but that's not the case.


Not only is the piece of land odd shaped, (or rather the area that we are planting on is odd shaped) the rows are also at an angle to the property line.  Amazing how the geometry that I though I'd never use after high school comes back when you have to triangulate point to point distances. 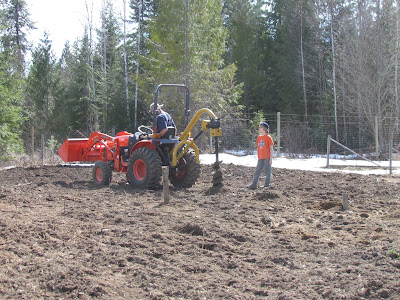 In preparing the land we worked it in the year before and again now in the spring so its as free of weeds etc as we can get it.  What we also do is auger a planting hole for each vine about 3 feet deep as this allows for an easy conduit for the vine tap root to get deep into the ground.When the vines come its easy to get them into the ground and we'll add a stake for them to grow up on.  We'll then add the irrigation lines shortly after they are planted.
Posted by The Vine House at 2:06 PM