The early grapes, high sugars and heat are the perfect conditions for wasps to invade the vineyard.  Usually we don't have this issue as the grapes are just coming into ripeness and high sugar as the cold weather is approaching. 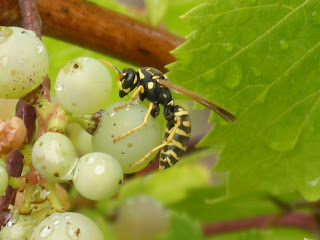 This year is an exception and the wasps were destroying the grapes.  Fortune would have it that i still had the old nets that i started with from Kootenay Covers.  They have small aperture openings that do not let the wasps or larger insects in.

Instead of putting out the bird netting I put out these nets instead and hopefully it will keep the wasps away. Thus far they had nearly taken all the Lucy Kuhlman grapes.  I swatted a few of them and they are all full of grape juice, and they are easy to hit as they are so full of juice as to be barely able to fly.

Unfortunately in this case the vineyard has grown and I did not have enough of the Kootenay Covers netting to cover all the vines.  What was interesting is that once I covered the all the grapes I could, the wasps then went on to locate other grapes in the vineyard that were still exposed and began to eat those ones - even those that normally would not have attracted them as they are not yet quite as high in sugars as the Lucy Kuhlman.
Posted by The Vine House at 7:37 AM

Here is some pictures;
Ravat 34 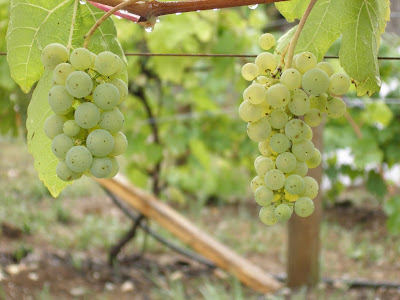 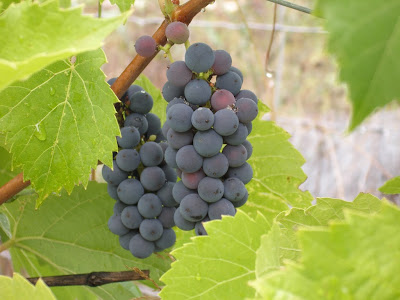 Evangeline (this was a smaller cluster, most are a lot bigger than this one) 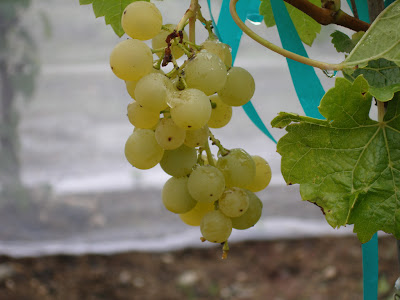