What a bizarr year so far, the coolest June we've recorded at 14.2c average and about 1 to 1.5 degrees below our expected June average of about 15.7c.  Looking to Kelowna Airport similar condiitons for them as they recorded 14.7 for June way below their normal average of 16.3c for the month.

The grapes were way behind going into July and apparently the whole region is facing this as one grower I spoke to in Enderby (just noth of Kelowna) said they were 1-2 weeks behind normal vine and fruit tree development.

This means we were expecting flowering in mid-July and for our site this is a difficult situation to manage simply in trying to ripen the grapes in the days we have left before fall frost which usually comes along the around October 7th.  So if this holds true then simple math tells us we've got about 85 days to ripen the grapes which is barely enough for the earliest varieties.

Well July turned it all around and we had about the hottest July we've recorded at our site comming in at 20.15c average.  In fact from July 9th to 17th the day time highes we're between 34c and 36.7c, no doubt it can get hot on the ridge.  We've also had alot of rain, several inches over the month so we've already recorded about 10-12 inches of rain in the year.  So while the temperature has been hot, we're not drying out.

However, the timing of the heat wave was right when the vines were in flowering stage and the heat caused problems with the fruit set.  This is called coulure or shatter and comes from extremes in heat or cold or rain during flowering and can also be related to deficient vine nutition.  The condition is pretty much universal in varrying degrees over all 22 varieities we're testing - see pictures of the Ravat 34 below. 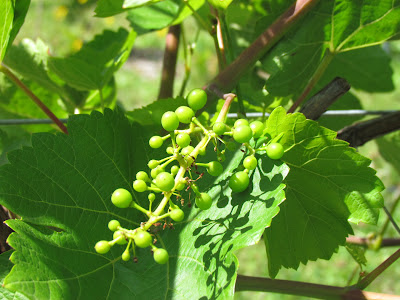 Coulure brings with it its own challenges now as the remaining grapes tend to be smaller and do not accumulate sugar like they are suppose to.  So what we'll have left for grapes doesn't look promising for this year but we'll see - we've got a love-hate relationship with mother nature these days.