This grape is officially known as its research name KW96-2 and as far as I know, hasn't been formally named.  Although this is not for us to name, we're for now calling it Evangeline, relating to it's Nova Scotia pedigree, as this grape is far to nice to have such a clinical name.  This grape was created by Dr. Jameison of the Kentville, Nova Scotia agriculture research station.  It is a cross of St. Pepin and Siegerrebe.

St. Pepin is a Hybrid bred in the United States from Seyval Blanc and Minnisota 78 by Elmer Swenson.  It is cold hardy to about -32 c and is known to produce white wine grapes with characteristics and flavours similar to Riesling.  It also possesses moderate disease resistance to both downy and powdery mildew. Siegerrebe was bred in Germany and is a cross of Madeline Angevine and Gewurztraminer.  It is very early grape with low disease resistance but from the grapes, fruity low acid muscat wines are made.

The resulting cross that resulted in KW96-2 possesses the cold hardy disease resistance of St. Pepin with the early ripening muscat flavouring of Siegerrebe.  Progressive testing of this variety at the Kentville research station and in test vineyards in Nova Scotia have found that this vine is a moderate producer of grapes that ripen 1-2 weeks earlier than L'Acadie Blanc, the Nova Scotia white wine standard. A few years back I was at the research testing station in Kentville in September and while L'Acadie berries were still hard and tart, the berries of KW96-2 were softening, sweet and had distinct flavours.

There is alot of excitement surrounding this new variety and several other crosses that have been created at the research station in recent years.  Tests of these new vines and production of grapes from them have lead to production of wine and wine quality testing.  Of all the varieties tested, KW96-2 rated among the highest by wineries and wine makers and did equally well when presented to a panel of seven (7) regional sommeliers.

This could be a very valuable grape in locations with short to very short seasons and moderately cold winters - locations like ours.
Posted by The Vine House at 9:31 AM

A few years ago I was in Montreal for business and had an extra day on hand.  Having heard of the long established viticulture and wine industry in Quebec, so I rented a car and headed out to the "Eastern Townships" to have a look.  The Eastern Townships is an area just south and east of Montreal in the area of Dunham.  It takes a few hours to get there but the drive is great.  I stopped at three of the long established vineyards/wineries in this area and found that the varieties that are being grown include the likes of Seyval Blanc, Vandal Cliche, Aurora, Marechal Foch, Sabrevois, St. Croix, and Frontenac among others.

Generally speaking this area gets quite cold in the winter, too cold for Foch, Seyval or Aurora.  However, those who have been practicing this intense cold climate viticulture in Quebec have unique techniques to reduce the chance of winter damage of these vines that have marginal hardiness for this climate.  Often the vines are removed from the trellis and put on the ground before winter.  This is what we do with our St. Croix in Edmonton.  Often the snow cover alone is enough to protect them but sometimes they are covered in straw or even buried in soil for further protection from the cold.  I tasted several wines in this trip and found some that were excellent and others that were alright but none that I disliked.  Of course everyone's tastes differ in what they like and dislike in the flavour and characteristics of wine.

I have yet to visit this region since then but on a recent trip to Montreal I went looking for some Quebec wines in the local wine store.  I asked the clerk if they had any in stock but was advised they did not carry any.  They suggested that I go to another specialty wine store at the Eaton Centre. However, I continued to peruse what wines in the store and stumbled across a small display of Quebec wines that they did in fact carry.  I advised the clerk that they did have Quebec wines and they were astonished.  I've talked to other who live in Quebec and many don't know they have a vibrant viticulture and wine industry.  Others that have heard of Quebec wines are reluctant to try them, they have an impression that the wines are inferior to those typically found in the wines stores.  In fact, the wines being produced from the Quebec viticulture industry can be excellent and many are winning awards on the national scale. 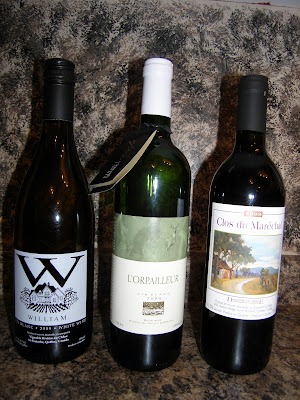 I brought a few of the Quebec wines back with me and have since tried two of them.   The bottle on the right is from Domaine Du Ridge from St. Armand, Quebec.  The name on the bottle is Clos du Marechal and in reading the vineyard web site it appears that the wine is made from Marechal Foch and possibly blended with some Lucy Kuhlman - however, I don't speak or read french, so this is a bit of a guess.  If this is Foch, then this was truely amoung the best Foch wines I have ever had - FANTASTIC.

The Bottle in the middle comes from L'Orpailleur vineyard in Dunham, Quebec.  This wine is made from Seyval Blanc and is classic Seyval - fruity, well balanced, very nice.

The bottle on the left is from Vignoble Riviere du Chene located in St. Eustache, Quebec.  I gave this one away as a gift to a friend down the street who grows Vandal Cliche in his back yard.  This is white wine and the bottle is named William and is made from Vandal Cliche grapes.  Don't know much about them except that they apparently make a very nice dry white wine and this variety of grape was actually created in Quebec.  If the other two and those I've had previously in Quebec are any measure of what this one is like, then it should be great.  Hoping for an invite from the neighbor to try this one out when he opens it up.

If your out that way to visit or if your live near these wine regions you've got to check them out.  You'll definitely find something you like.  Looking forward to the next visit!
Posted by The Vine House at 2:19 PM