We harvested the grapes on October 6th this year.  That gave us 158 frost free days and about 934 degree days growing.  The season started with good winter survival of the vines/buds with the coldest winter temperature being -22. (see link to climate data for details).  Last spring frost was May 2nd and fall frost was October 8th.

May was cool, below normal with the usual abundant rainfall.  Bud break for most varieties was approximately May 18/19th.  All varieties were given a 8-8-8 fertilizer treatment and a micro-nutrient treatment (Scotts Micro-Max).  Practice double pruning to reduce potential loss to late spring frost.

June was fairly close to normal temperature, except the last 10 days of the month and first week into July was below normal and delayed flowering a few days.  Average rainfall.

July was cool and continued the cool spring trend.  Flowering was first week in July for all varieties except Ravat 34.  Ravat was about 4-5 days behind the other varieties which is unusual as Ravat typically flowers the same time (+/- a day) as the other varieties. (This should have been my first clue that this variety was over cropped).  Rain was moderate to low and the last rain in July was on the 23rd.  This was the start of the drought that lasted until mid September.

August was normal for heat, hot days on average, no rain the entire month.  By August 23rd the vines were looking fine, Leon Millot was well filled out as were most other varieties, however the berry development of Ravat 34 was delayed.  The Lucy Kuhlman and Colmar Precoce Noir were just starting to show some colour on the 23rd.

September was above normal for heat (monthly average of 15.3 degrees c) and the drought continued until September 17th (8 full weeks without any rain).  As of the 10th most varieties were showing moderate to high water stress, Ravat was showing severe water stress and was given some water.  Most varieties were colouring well, but the berries are noticeably small compared to normal especially Ravat. Deployed the nets.


October - Harvest was on October 6th, followed by a hard frost on the 8th.  The week prior to harvest it rained several inches and the vines soaked up the water they had been denied all summer.  Many varieties cracked, the worst was Ravat 34, the best was Leon Millot and Regent.
Cracked Ravat with small berries pictured below; 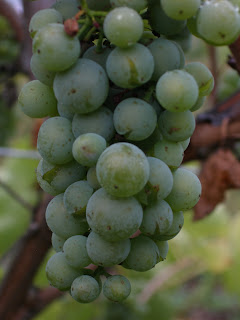 Below - photo of one of the few Ravat clusters that somewhat filled out; 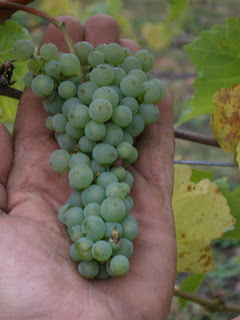 The juice brix readings taken at the vine was noticeably lower than normal (1-2 brix below what was expected) diluted by the uptake of water from the rains.  In addition it can be expected that the drought served to shut down the vine sugar accumulation and photosynthesis activity for several weeks leading up to veraison and through a portion of the ripening period.  Interestingly the must weights were 1 brix higher.  The vines were hardening off well already with canes on some varieties showing several feet of wood.  Photos below of Leon Millot followed by Lucy Kuhlman 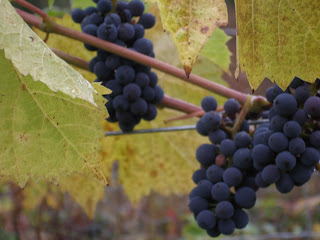 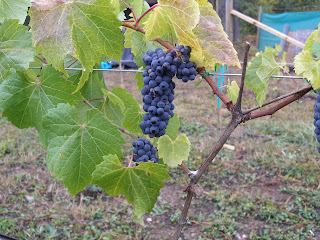 This season I learned a great deal about crop load, especially for vines 3-4 years old in dry land viticulture.  Likely a more experienced grower would have recognized that the delay in flowering of the Ravat 34 was a function of over cropping the vines or would have cropped accordingly in the first place.  Secondly, I should have thinned the Ravat shoots in August rather than September when the berry development was noticeably behind schedule historically and relative to the other varieties.  This would have reduced the water stress and given the berries on the vine a chance to catch up.  As for the other varieties it appears they were cropped properly however, a thick mulch would have helped reduce the water stress.  In short, the long growing season was about 10-12 days better than normal, the heat accumulation was about normal, but the drought significantly reduced the size of berries and the amount of sugar accumulated. Finally, the addition of the potassium and micro-nutrients eliminated the sporadic potassium deficiency identified in previous years.
Posted by The Vine House at 10:48 PM 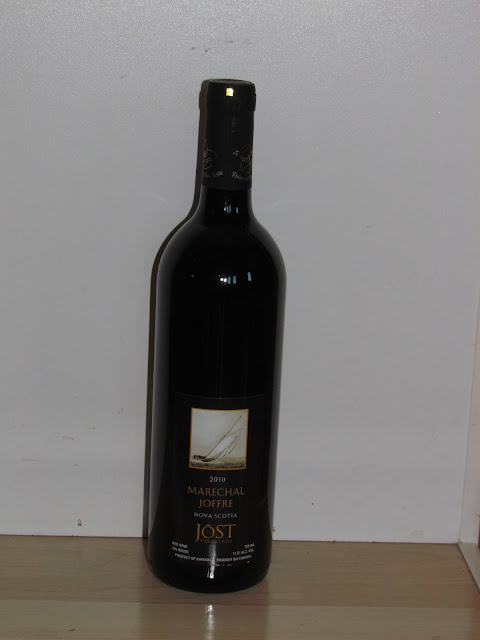 This wine has the character and similarities that one finds in the other more well known Kulhman varieties that came from the same cross - Leon Millot, Lucy Kuhlman, Marechal Foch.  It is dark red, but not inky dark like the way Foch and Lucy Kuhlman can be, more like Millot, perhaps even lighter.  Dark fruit aromas abound with the most notable being plum and black currant - showing its strong similarity to its simblings. Taste is also typical of the other Kuhlman's, with rasberry and cherry the stand-outs although a little less cherry than what I am accustom to in a Millot and over-all less powerful flavours.

This is a very likeable wine, and really reminds me of a Lucy Kuhlman-Leon Millot blend, with none of the herbacousness that I've found in Lucy Kuhlman varietals.  This Jost release recently won a bronze medal at the 2011 Atlantic Canadian Wine Awards and obviously has the ability to stand on its own as a varietal.

Would be nice to see other wineries rethink the notion of blending this variety away.  It can enhance or fortify a variety with less colour or one that has struggled in cooler years to achieve complete maturity.  In addition it ripens about 2 weeks earlier than Foch, yet has about the same disease resitance and cold hardy properties (see link to Marechal Joffre Grape).  For these reasons it is a great variety for the cooler short season locations.
Posted by The Vine House at 4:56 PM