Its been a really warm winter so far and up until end of December not too much snow. The coldest temperature to January 7, 2020 is about -10c, do not cold at all. That said there was abour 2 feet of snow on the ground at the end of December but nearly 3 feet of snow has fallen in the last week. 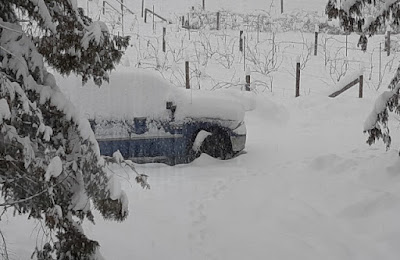 We dont want much more to fall as if the snow gets too deep it becomes destructive to the vines and tellises. What happens is the deeper the snow gets the more like ice it becomes near the base as it compacts from the weight of snow on top. As more snow accumulates, the snow column becomes more wet, dense and ice like the closer it gets to the soil surface. It melts at the bottom due to ground heat and the height of the column of snow slowly drops. As new snow falls this becomes a slow movements of the column of snow like a conveyor belt from top of snow dropping to the soil surface over time.

As the snow begins to turn to ice it locks on to what ever is around it, such as trellis supports, fencing, or the trunk of the vines. Then as that snow continues to drop towards to soil surface it pulls what ever it has attached to with it. It will pull the vines right off the trellis wires and collapse the vines right to the ground. If the vines are not ripped off the trellis wires it can actually collapse the trellises and end posts as we experienced 2 years ago.