There are others in the Arrow Lakes valley that have a keen interest in viticulture and the best example of this that I know is the Sunset Ridge Vineyard in Nakusp (see link on the links section of the blog). Sunset Ridge is a bed and breakfast run by the Scott family in Nakusp and they have established a small vineyard on their property. The vineyard is approximately 1 acre with just a little less than that planted at this time.

The owner, Jody Scott has had an interest in growing grapes for sometime and while there was really no other vineyard template to follow in this area he has shown he can grow very nice grapes.  He quickly found that the area around Nakusp and the Arrow Lakes Valley would be classified as cool climate viticulture. Scott did some research on cool climate viticulture and found some interesting results from grape vine trials being conducted in Washington State near Mt. Vernon. He also spoke to industry experts on Vancouver Island (also a cool climate viticulture zone) and decided on some varieties of grape vines to try at his location.

As you can see from the pictures below, his vineyard is doing great. In the spring of 2010, Scott took specialized courses in viticulture through the Okanagan College, where he received a Certificate in Vineyard Management. A introductory level course of vineyard management is comming to Nakusp in March 2011 (click here for details). 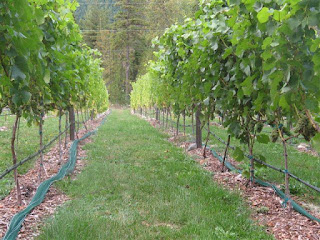 Scott believes his degree day accumulation falls between 875 and 1000 and extrapolates this from local and regional data sources. These are conservative estimates and the degree days may be up to 10% more than this. The rainfall at this location is approximately 12-14 inches between April 1st and September 30th and the frost free days are estimated at between 150 and 160 days. 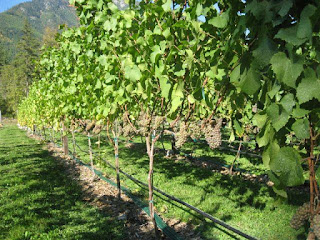 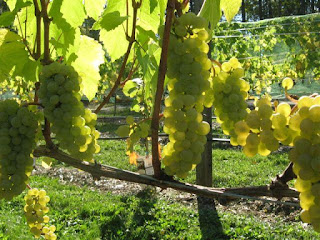 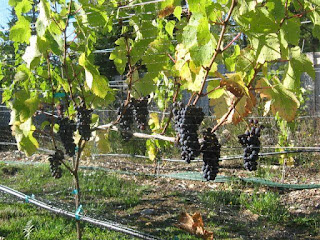 In the next few years Scott will be getting a clearer picture of how the other varieties perform at his location.
Scott believs there is potential for expanded viticulture in the Arrow Lakes valley from Nakusp on through to Edgewood (60 km south of Nakusp). Recently Scott and Jerry Botti of Burton (25km south of Nakusp) pioneered the Arrow Lakes Grape Growers Society (ALGGS) to provide a forum for those interested in viticulture in this area to collect and share ideas. The ALGGS is also looking to conduct research by way of further grape vine trials in the region and to define the climate in general in this area as well as variations in climate with the valley region.

Jody Scott can be contacted about the Arrow Lakes Grape Growers Society at;   jbscott(at)telus.net
Posted by The Vine House at 8:19 AM

The Selkirk College in collaboration with Okanagan College are offering a five (5) day course on vineyard management practices.  This introductory level course titled "Cool Climate Viticulture: An Introduction" is being held March 30th-April 3, 2011 (Wednesday to Sunday) 9 am - 4 pm at Selkirk College in Nakusp.
Contact: Chris Faint (Coordinator, Selkirk College) at 250-265-4077 for further details.

Field Trip to a local vineyard in Nakusp

The course is usually offered over a period of several weeks in Kelowna or Penticton this makes attending this course difficult for those who live in the interior.  This is the first time such a course has been offered in Nakusp so if you are at all interested in this topic, or starting your own backyard or commercial vineyard, you absolutely should not miss this course.
Posted by The Vine House at 9:55 AM