Contrary to the Environment Canada prediction of above average temperatures for May and June we've experienced another cool spring and early summer.  In fact in the 5 years we have been taking temperature readings this is the coolest May-June yet.  May came in close to normal at 11.8c average and June was 14.2c average.  The rain has also been relentless and we've probably had 8-10 inches since May 1st.

The cool weather shows in slow growth of the vines.  We usually flower the first week of July this year and we're going to be flowering about 5-7 days later than normal.  As of July 3rd, the Leon Millot are the first to show signs of cap fall and some flowering within clusters and on July 4th Colmar Precoce Noir was also starting to show some flowering.  The Leon Millot looks good this year, the flower clusters are getting bigger as the vines mature although with the high rain and humidity we're seeing some fungal presure with powdery mildew on the leaves of some Leon millot and some downey mildew on the leaves of some Castel.  Photo's of the Leon Millot flower clusters below; 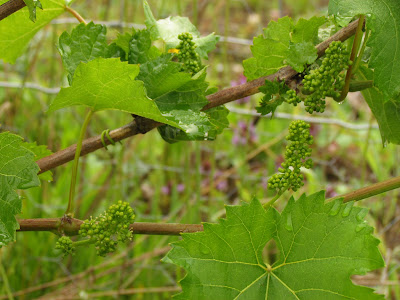 The Colmar precoce looks good also and shows great growth and large clusters.  The Lucy Kuhlman is slower this year, and the Marechal Foch is also looking good.  Photo's of Colmar Precoce flower clusters below; 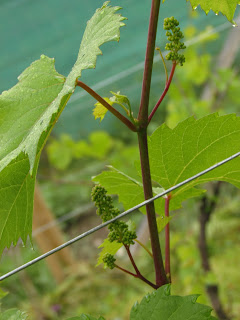 The Triomphe D'Alsace also looks good but seems to be slower than than some of the other kuhlman varieties - kind of like how Lucy Kuhlman seems a bit slower.  Photo of Triomphe flowers below; 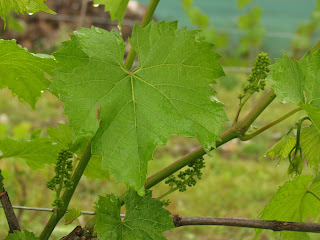 The Castel looks good for third year and we have several more clusters this year than last and will get a better idea of relative ripening times.  Photo of castel cluster below; 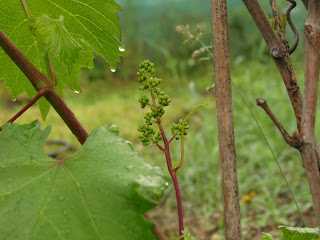 The Ravat 34 looks good again however, some of the clusters this year are small and several shoots produced only one cluster.  This could be a result of over cropping the vine last year and the drough impact on the vine also.  One thing about Ravat 34 is that it likes to send shoots out from secondary buds.  I had pruned the Ravat down to a low bud/shoot count in late May.  By the end of June I noticed that there were about 50% more shoots, mostly secondary buds, that had popped up and had to prune those off.  This is excellent if you were to get  a late frost as most of the secondary buds/shoots carry a small cluster.  The vines look excellent again, supper healthy setting nice flower clusters.  Photo of Rvata 34 flower clusters below; 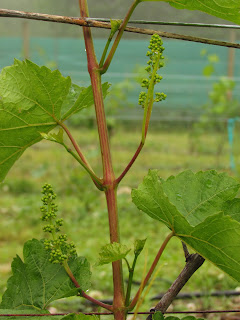 We also have several flower clusters on the Evangeline this year and like the castel we'll get a good idea of relative ripening times of this variety versus the other varieties.
Posted by The Vine House at 9:04 AM