We had a very interesting year this year starting out with a normal May and bud break around the 18-20th of May.  We had lots of moisture throughout May and June, way above average and probably about 12 inches by early July.

June was cold though, way below normal and stunted the vines so that the flowering didn`t happen until nearly the middle of July.  Most varieties were in mid-bloom stages by about the 12th-13th of July, which is about 5-7 days later than normal.  just as the vines were flowering we experienced record breaking heat and had 9 days of 35-37c heat, and the month was the second warmest July we have recorded at 20.3c average.  It appears that the extreme temperatures during flowering caused some stress to the vines at this delicate stage and the flower clusters on all varieties did not have good berry set.

August was the warmest August we`ve recorded yet at 19.6c average and no rain fall at all and we had a few days in the 37c range.  September was also warmer than normal at 14.6c average but we had a 8 day stretch in mid month of 26-30c temperatures which helped with the ripening.  It finally rained on the 8th and 9th of September and we received about 1.5-2 inches, which was enough to help out the heat stressed vines and just in time.

We harvested on October 3, as we had a -3.5c frost and that ended the season.  Canes on most varieties had hardened off quite well by then.

The grapes were few by volume but the juice chemistry numbers were better than expected (see Grape Harvest Data pages).  Some of the highlights were the Leon Millot that read 19.7 brix in the vineyard and when crushed the juice was 20.5 brix and 3.1ph.  The Petite Millot also stood out and is consistently putting up good numbers, this year at 19.5 brix in the field and 20 brix after crush.  The Colmar Precoce Noir also ripened to 20 brix in the filed and 21 brix after crush and was very ripe.

We made some changes in the vineyard this year, one we went to a more conventional netting that is black and has virtually no shading effect.  The netting we had been using was white and had approximtely 12-16% shading.  While relatively small shading effect, the accumulation over a week or a month could reduce the ripening of the grapes.  The other change that proved very important was the early September removal of the large ponderosa pine that was on the south west corner of the vine (see previous blog).  While the shading effect of the tree  was held to only the south west corner of the vineyard during May-August, by September the sun is low enough in the sky that the tree eventually shades parts of the entire vineyard over much of the day.  It appears that removing the tree changed the heat accumulation for the month dramatically.  If we compare the heat accumulation over the last 5 years for Kelowna and our vineyard, historically on average we have accumulated about 20 DDG (10c base) less than Kelowna in September.  However, without the tree and shading we were only 4 DDG less than Kelowna for the month - that is a dramatic change for us.

We also learned this year that while the mid row cover crop of clover is helping generate plant matter and nutrients for the soil and vines, it draws too much moisture from the soil that is desperately needed by the vines - especially in the droughty periods.  For our sandy soil and dry land farming practices we will be reducing the width of the between row cover to just a few feet wide in years to come.
Posted by The Vine House at 10:20 PM

We had the massive Ponderosa Pine that was located on the south west corner of the vineyard.  We had been wanting to take this tree down for some time as it is leaning south and seems to bee leaning more and more each year.  If it were to come down it would happen in a big storm and likely take out the power lines for everyone up the road from us.  So we had Loki Tree removal come to the property and they took it down in sections.  They did and excellent job, and cut the trunk into 8-10 foot lengths.  Great service from Loki and they are very reasonable in their price and serve much of the West Kootenay region check out them through the link to their web site in links section.
We're also lucky to have such great neighbors who came along with his skid steer and moved away all the trunck pieces and cleaned up the tree linbs, piling them into a big burn pile for later in the winter. 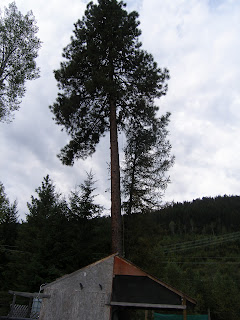 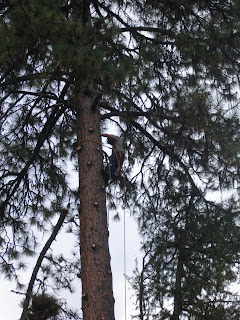 While we new the the tree needed to come down, we also knew it shaded the south west corner of the vineyard and lowers the head accumulations at that point.  however, in the fall, during the ripening period when the sun is lower in the sky the tree shades the entire vineyard as the shadow moves in relation to the sun.
What we didn't realize was how much that changes the ripening of the grapes until this year.  The tree came down when we were just putting the bird nets up (Sept 7-8th).  over the next month we had excellent heat in September and this was maximized by not having the tree to block the sun.
Sad to see the tree go as it was a beautiful old tree (about 100 years based on the rings) but we're glad it doesn 't pose a danger anymore and happy with the extra heat in the vineyard.﻿