March was cold the first 2 weeks, in fact the coldest day this winter was March 6 with -20c. This is really unusual cold for March. But in the flip of a coin the cold is gone and the last 2 weeks have been fairly warm and the snow has melted significantly. Still lots of snow between the rows but there is exposed ground here and there and the soil is warming bringing on scale crack on the earliest varieties.


We did some lite pruning and cane positioning and tieing on some varieties that we do long cane pruning. We also started pruning the Ravat 34 into the 3 bud spurs on bi-lateral cordons (see below).  The canes look healthy comming out of winter - cutting into the cane the vine is nice and green. 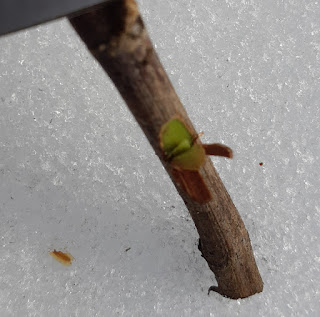 We will have to do a secondary pruning later at the end of May when the shoots are about 5-7 inches long and keep the best ones. We want to have about 4 canes per trellis foot so this means we will have to eliminate about 1 cane per spur.  We understand that Ravat 34 will usually put out 2 clusters per cane with a combined weight of about 150-175 grams. So with 4 canes per foot we expect about 600-700 grams per foot of trellis or about 1.25-1.50lb per linear foot of trellis. 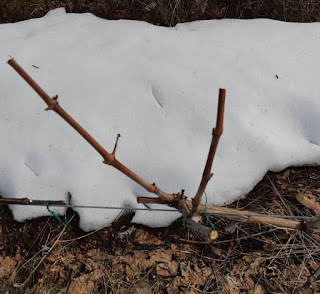 But this is perfect world estimates - late spring frost, cold during flowering, drought or other factors could affect the crop and you really don't know what you have until just before harvest.
Posted by The Vine House at 9:36 PM