Slow and steady is the spring this year - no hot and cold extremes. While it would be nice if the vines were a bit further along there has been no risk of late spring frost and I think I'd take that over getting a jump on the summer.  For the month  of May, Kelowna airport had an average temperature of about 13.3 c, so while we haven't had time to download the vineyard weather data we probably averaged about 12.3 c and given the stage of the vines that seems about right and is about normal.  It would seem we are pretty much on track at Arrow Lakes Vineyard and the vines are looking good so far.  I am seeing lots of buds on most varieties and Acadie Blanc is looking quite good. See below; 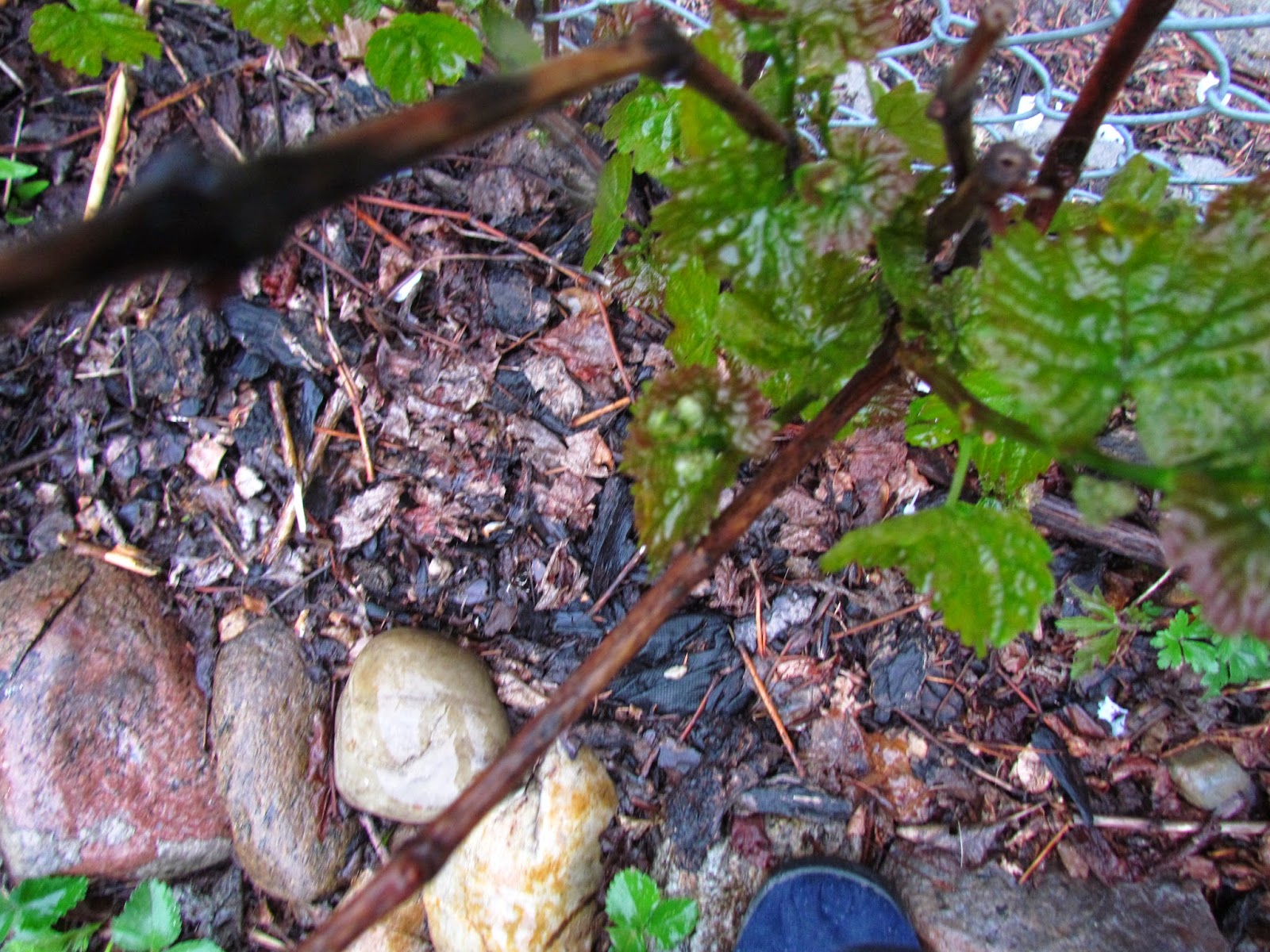 The picture doesnt really show whats happening on the Acadie very well but in the centre there is a shoot emerging and it has 3 clusters.  Most of the shoots have 2 and some have 3 clusters.  Very productive vine and excellent hardiness.

We added some micro nutrients to the vines last year and I think it is already showing its value especially in those vines that have seemed to struggle (Seyval, Castel, Pinot Noir, Zweigelt) in our nutrient poor sand.

As for the other whites, Petite Milo looks good again and Ravat 34 is outstanding. I am always so impressed with Ravat 34 in its disease resistance, production, cold hardiness, growth habit. It makes a great chardonnay-like wine which makes sense as it is a chardonnay cross.  They should have called it Chardonnay 34 and it would probably have lots of acres in planting. Evangeline is showing good production for young vines and we've finally got some clusters on the Seyval this year.  The Vandal Cliche also has some clusters so we should get some numbers from all the white varieties this year.

As for the Reds, we've got good production on all the kuhlman varieties (Foch, Leon Millot, Lucy Kuhlman, Joffre, Triompe D'Alsace) except for Colmar Precoce Noir which is light on production.  The Castel has shown a big improvement this year and we'll get a nice crop of them.  The big surprise is that we're seeing far more clusters on the Pinot Noir 115 and Zweigelt than ever before.  While we have ever so slight production on these last 2 varieties is has not been enough that we could utilize in any valuable sense for ripening data - perhaps this year though.  The St. Croix has more clusters this year but again very young vines. The one we have the most difficulty growing is Regent and again it is struggling.  Everything I read tells me the regent is a nice vine but for our soils and conditions - not so much.

So good start and while it may be foolish "to count our chickens before they hatch" its important to look ahead and plan for what might be, think about possible wine styles given variables in weather, production, ripening etc. So looking at possibilities, if our estimates are correct and things go our way over the growing season we'll have 2 red wines (a varietal and blend) a rose' (varietal or blend), and two whites (varietal and blend).
Posted by The Vine House at 8:55 PM