The reds and whites are now in the last throws of fermentation. The whites are in fact long completed and are now clearing nicely. Again Ravat 34 is such a nice grape to work with as it ferments nicely and clears so easily on its own.
We have the same red varieties on the go with Foch, Leon Millot, and Castel. We also did a varietal with Triompe D'Alsace that so far is really appealing. Lots of changes to come yet to the wines as they drop sediment and move into the aging process but so far they all are all comming along well. 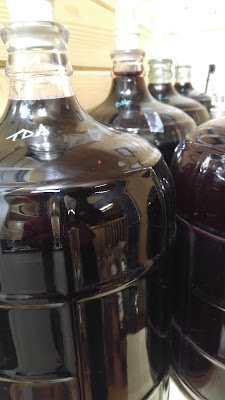 The old saying could not be more true "time flys when your having fun" and ten years have gone by since we started capturing climate data at Arrow lakes Vineyard. In 2008, we started capturing climate data. This was the year after we planted the first Leon Millot vines in 2007. So after 10 years of climate data we have a good picture of the climate conditions at Arrow Lakes Vineyard. Its no secret that the vineyard potential in the region is excellent and Sunset Ridge Vineyard in Nakusp is a great example. I think when you combine this information with other regional climate info, like what is being done though the Arrow Lakes Grape Growers Society in Burton, one can see that the area from Nakusp to Edgewood is excellent for growing grapes.

We have posted the annual climate data on the blog from the start so anyone could see first hand what is happening climatically at Arrow lakes Vineyard. Over the years we've also made some observations about what has been valuable in making the best out of our vineyard site. So here are the 10 year details and averages for Arrow Lakes Vineyard followed by a few observations;

2 - Clearing the land and increasing the size of area cleared seems to have increased the day time temperatures in the cleared area. The bigger the cleared area the more noticeable the change.

3 - Cultivating the area between the rows brings the vines into bud break faster than areas with out between row cultivation (with grass). It also appears that the bare cultivated ground heats up faster during the day and continues to radiate heat in the evenings for some time. This has proven very important in the fall during the ripening period. In addition, the rain or other moisture that falls or accumulates (such as dew) is absorbed into the soil and used by the vines instead of being used by surface grass or weeds.
Posted by The Vine House at 7:05 PM

Grapes were excellent quality this year considering the drought we had. Harvest was on Sept 30th and the despite the late season rain there was no berry splitting on any of the varieities which is reflective of how dry the soil was. Here is some of the Ravat 34. 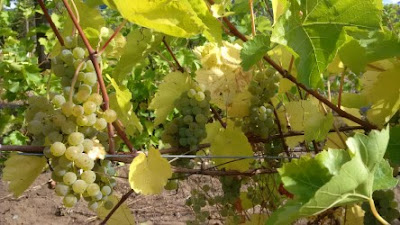 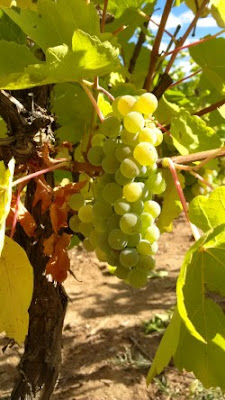 This was the best year we've had for sugar accumulations and in testing ph the numbers are excellent as well. Two standouts this year were the Castel that came in at 25 brix and 3.1ph and the L'Acadie Blanc which was 24 brix and 3.1ph. Here is the sugar numbers on several of the others.