Its June 24th and we went from May as one of the coolest Mays we've recorded in 13 years to June which is comming in as one of hottest Junes in 13 years.

Really quite remarkable that the vines have comecalong so fast and now are into bloom with some varieties at the end and others just getting started.

The Castel and Leon Millot are just finishing and many clusters have fruit set. The Marechal Foch and L'Acadie Blanc are 50-75% through bloom and the Evangeline and Petite Milo are just getting started.

Here is how they look, 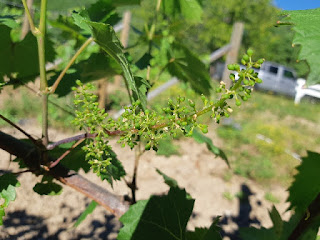 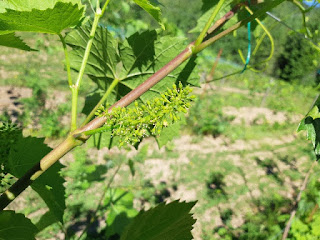 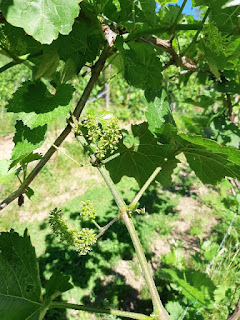 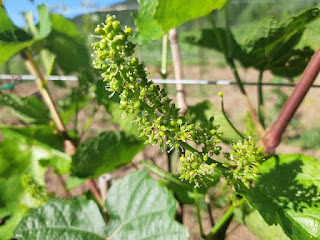 So we started the cuttings outside at the beginning of May..see the link to the earlier blog. The cuttings leafed out and were growing well but we had a nasty frost and several of the new buds got damaged. 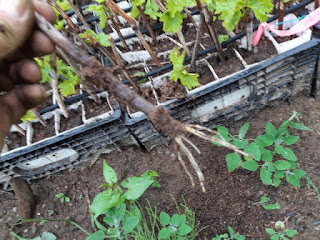 What surprised me was how the cuttings kept pushing more secondary buds and the vines have lots of leaves popping.

Checking to see if there is root development and the Foch is looking great (photo). I expect yge others are doing well too.

Once those roots get to be about 3-4 inches, the shoots will really start to grow and they will be well on thier way. With any luck we'll get those new vines out into the vineyard by the end of July.

From cold May to warm June and just like that the vines have caught up to where they should be and are on track for bloom in the last week of June. 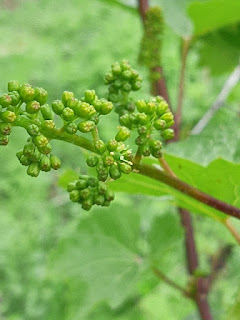 Some flowers clusters show signs of bloom on the way with an occasional single flower in bloom - like the Marechal Foch seen here. Most are 7-14 days away to bloom yet.

The growth has been strong and significant rain in June which is good as the long range forcast looks like hot and dry weather on the way.

So I mentioned in the last blog about the frost we had. It killed alot of the crop we had comming - thank goodness we dont get those very often. 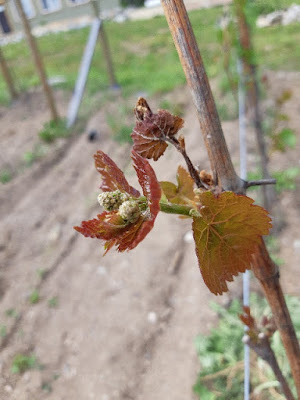 Often what happens after that primary bud is killed by the frost is that the secondary bud grows. In fact even with out a frost its common for many varieties to push out both the primary and secondary buds which turn into 2 shoots from the same node.

This is where crop adjustment happens and if you have both the primary and secondary bud growing into shoots then you go along the rows and pull off all those secondaries.

Usually the crop is much smaller on secondary buds but its better than nothing. This is one thing I like about the hybrids we grow. Lots of them can produce a decent crop on the secondary bud. The photo above is L'Acadie Blanc and you can see the primary bud/shoot died from the frost but the secondary is growing and fruitful with two visible flower clusters. Its a bit behind where we should be for growth but there is lots of time to catch up.

Foch and Leon Millot will produce on secondary buds as well.

Vines Are Leafing Out

So its been a cool May again, like 2020 but colder, and with frost and the vines have been slower to leaf out but they are coming along. We had a week of warm weather starting the end of may into June and that really brought the vines growing. The L'Acadie Blanc was among the earliest to bud out and leaf out which is rather remarkable as in years gone by they are no earlier than other varieties. Photo from June 5th. L'Acadie also suffered some frost damage, but about the same as the other varieties. 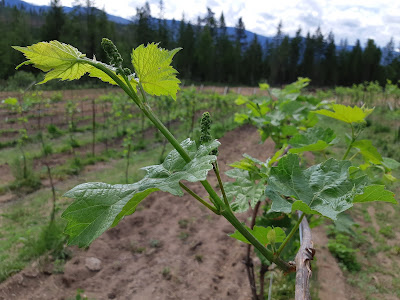 Just 1 or 2 degrees in soil temperature can make the difference. Several years back we had dozens of Leon Millot plants potted that were dormant and on shelves stored for the winter in our machine shed. In the spring as the temperature warmed up the vines on the top self at about 6' high started to push buds while none of the vines on the bottom shelf were showing any signs of pushing buds. It was quite remarkable to see as there was only a few degrees difference in the temperature from 1' off the ground to 6' off the ground on the shelves, but enough to warm the soil enough to get the top vines active.

Regardless we are in June now and all varieties are leafed out and catching up to L'Acadie. At this point we can start to gauge the crop potential based on the flower clusters observed. 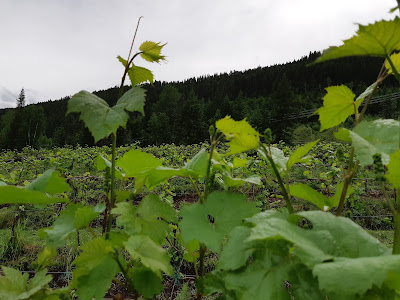 But this is just speculation, we really wont get a solid picture of what the crop may be until early-mid July which is after flowering and fruit set.

Cold Start and Frost in May

So with the month of May behind us we are hoping for some serious heat in June. May was really cool and everything is delayed by a week right now. In the last 10 years we would usually record a temperature of about 13c to 13.5c and that gets the vines leafing out by the last week of May.

This May we recorded an average temperature of  12.0 and we had a late spring frost too of -2 on May 19.  There were records broken from cold temperatures all over and even Penticton recorded -1. As the vines were delayed a bit not all was lost but the frost still killed off alot of the primary buds. The secondary buds didnt get damaged and are pushing and there is some flower clusters there too but not the size or amount that exists on the primary buds. These secondary buds are also delayed and should be at the 5-6 leaf stage right now, but we have to leave most of them as replacement canes witch will become spurs at the next pruning. Last time we had a late spring frost like this was about 11 years ago and was -1 and really didn't cause much damage - so this time its an anomaly. 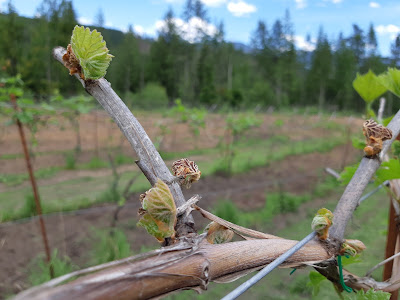 The crop will be smaller this year but already this starts to set things up for something interesting. Fewer buds and canes transfers more growth to those remaining canes and flower clusters - and its events like these that set one vintage apart from another.