As of February 16th, this has been the warmest winter we have recorded so far since we started monitoring the temperatures in 2007/2008.  The coldest temperature to date has been -15c one night in December and at the same time we've had alot of wet snow and rain.  The wet snow has caused a bit of damage as it accummuated on some of the vines and weighed them down so much as to pull the wire anchors loose from the posts in some places.

This time of the year is a good time to assess the vitality of the vines and given the warm winter we'd expect them to be pretty good overall.  By now we would usually have experienced the most severe weather and we are now moving into spring.  The potential downfall to a warm winter is that there may have been strong diurnal temperature swings (warm during the day but freezing at night) which can cause damage to the vines.

In checking several of the varieties they appear to be quite healthy both in the canes and the buds.  This picture shows nice green healthy cane. 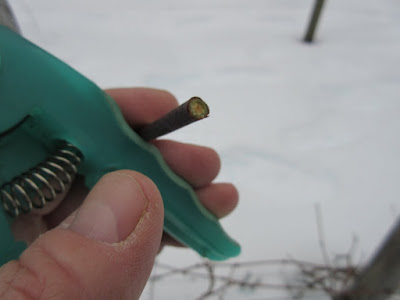 We'll now move on to pruning shortly and while for some vineyards pruning in March is rather late pruning we dont want to prune until we can assess how healthy the vines are comming out of winter.  If we prune in January and then in early February we were to get severe cold that kills many of the buds then we may have a very small crop that year.  Even in waiting till early March to prune we will still leave extra buds on the vine in the off chance that there is a late spring frost.  The extra buds gives us a bit of insurance against the potential frost damage.  Once the risk of frost has past we will adjust the canes and crop load accordingly by conducting late "green" pruning in May.
Posted by The Vine House at 11:43 PM

We've bottled up the 2015 Arrow Lakes White.  We used the same blending ratios as last year with 70% Evangeline and 30% L'Acadie Blanc.  Both grapes ripened wonderfully in 2015 with the Evangeline at 22 Brix 3.3ph and the L'Acadie ripening to 21 Brix 3.0ph. This is the third year we've been able to make this blend and its nice to see a similar flavour/aroma profile with tropical fruit aroma and flavours  repeating year over year. 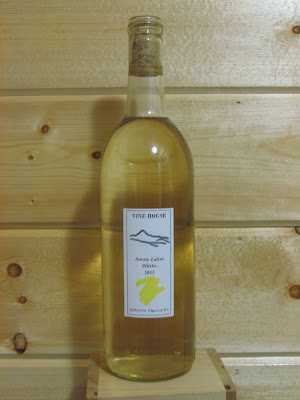 Evangeline is very much like Gewurztraminer and has that muscat lineage as it is a cross between Seigerrebe and St. Pepin.  This gives the Evangeline the tropical fruit flavours and aromas.  Evangeline grapes below, 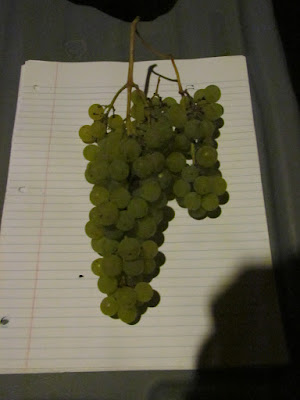 The L'Acadie adds crispness and the usual hints of pear the are found in L'Acadie are elevated with the Evangeline but the citrus side of L'Acadie is still evident even at the 30% ratio.  L'Acadie grapes below; 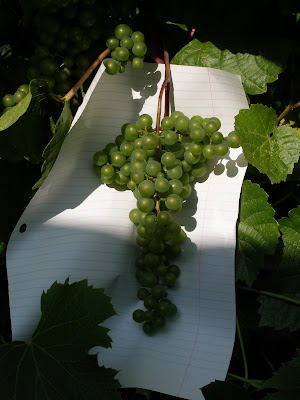