The right crop load take years to assess and depends on so many variables such as soil, moisture, sunlight, training methods, diurnal temperature fluctuation, humidity, climate (micro and meso), nutrients etc. It really ends up being somewhat of a trial and error that one needs to go through over time.  Crop load is also related to ripening and the general idea is that if a vine is under-cropped it may hasten the ripening process as there is less fruit to ripen. On the other hand over-cropping a variety may slow the ripening process as there is more fruit to ripen.

This year we conducted an in row trial with Leon Millot to see the how crop load affected grapes chemistry and ripening. We planned to increase the crop load by leaving addition shoots to see if the addition shoots would increase crop load without noticeably affecting the quality of the grapes for this variety.Our noramal amount of shoot is 8 per foot and on part of the row we left 12 per foot. Here are the numbers.

The extra shoots did not translate into bigger crop but more work and poorer quality grapes. Bottom line - we won’t be doing that again, but good to know that our crop load is pretty good at 8 shoots per foot.

Also important to note is that the shoots on the vines cropped to 12 shoots per foot were generally shorter and as such won’t be as suited for use in long cane pruning next year – which is the pruning style we have been using for Leon Millot. 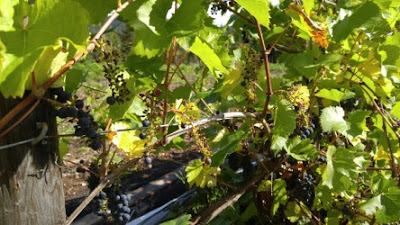 So here is the sugar concentrations for the various grape varieties that we harvested from the vineyard this year. A good year for sugars and ripeness in all the varieties relative to our location and after 8 years of data it really shows which are the standouts over time, especially the past 6 years.

The sugar readings are take in the field on harvest day and are a sampling of a few grapes from various clusters at different trellis heights and positions along the row. The sugar reading are measured in Brix and each brix will give approximately 0.56% alcohol to the wine when fermented. So for example a sugar reading of 20 brix would result in wine with alcohol concentration of about 11.2%.

We usually find that what ever reading we get in the field is often 1 brix higher once the grapes have been crushed and pressed and measured by specific gravity in the tank. So for the readings below, add 1 brix.

The table below also records, the bud break in the spring, the approximate time of flowering, the harvest date, and degree days growing (heat accumulation). Here is the table;


Grape Harvest 2016
So it has been an interesting year for growing and the weather has been unusual in both that overall it was a warm year with about 1050 degree days growing celcius (+10c) over 150 frost free days and with a really early spring.  For us a really early spring is bud break 3-5 days early and this year we had about 7-10 days early for some varieties. Growth was good at the start and reds and some whites were flowering the first and second week of June in warm dry weather and had good fruit set. Some of the whites on the other hand flowered about a week later in cool wet weather and we had poor fruit set especially on the L’Acadie Blanc. We did experience some limited powdery mildew continuing on into early July and this had a minor affect on fruit set on some varieties as well. 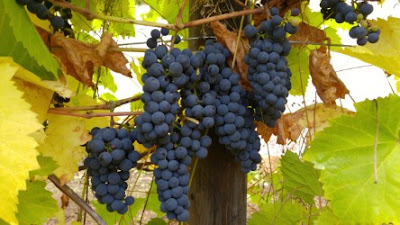 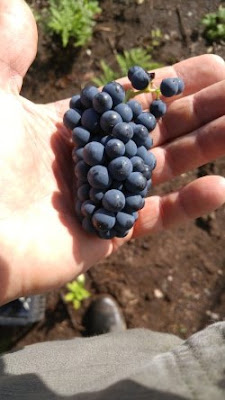 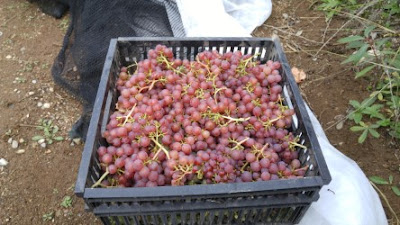