Having a look around the vineyard on May 19th I see that some of the grapes are budding out and others are on there way.  We are a few days later than normal but a few days earlier than last year.  Again, the Ravat 34 looks great, approximately 90-95% bud survival (photo below).  The Leon Millot shows some winter damage with some vines showing bud survival between 40% and 70%.  The Castel is looking great, excellent bud survival and emergence given they are just coming into their second year.  The Agria died back to the ground again and I've pulled it out.  It is clear that the conditions at my site are less than optimal for this variety.  The Ortega is doing a bit better with some bud survival and the Regent is similar perhaps even a bit better.  Of the blattners the Petite Milo looks the best, with about 50% bud survival, the Cab Foch and Cab Libre pretty much died back to the ground.  Some of the Acadie are beginning to bud out however, as these were planted in the fall, I expect most of this years growth to be new shoots from the base of the plants. 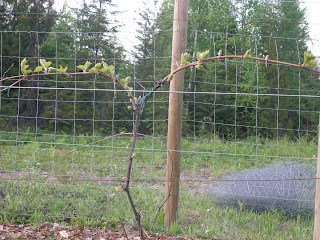 Looking at the past winter (2010/2011) temperature.  There was a cold snap in late November that saw the temperature plunge to -22c and again another cold snap in February that went as low as -21c.  The winter temperature pattern is that of an on-going freeze-thaw cycle of 10 to 14 days. The information from the data logger shows the cycle starts with the temperature cooling off over a 5 to 7 day period then warming up again over 5-7 days to complete the cycle.  The freeze part of the cycle has temperatures that typically range from -2 to -10 and the thaw part of the cycle sees temperatures in the +6 to 0 range.  This pattern starts at the end of November and continues on to the end of February.  Below is the Oct-Dec 2011 temperatures - click image for larger view;

This freeze thaw cycle may be causing damage to the buds on the vines as the buds may be forced in an out of dormancy.  There is alot of snow in the winter at the vineyard site (February 2011 photo below).  Mid winter snow is about 3 feet and could provide some protection from the freeze - thaw cycle so were going to lower the fruit wire on the Leon Millot to 24" to see how that affects the bud survival next year. 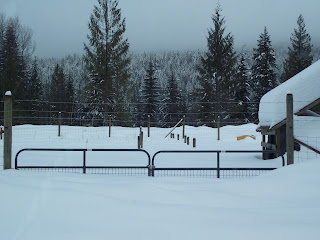 We also added some fertilizer and micro-nutrients this spring as some vines showed deficiency last year. This can also have an affect on the hardiness of the vines and bud survival rates.  The fertilizer is a basic 8-8-8 blend, and the micro-nutrient amendment is Scotts Micromax.
Overall, the vineyard is looking good this year.  In June, we'll see how the vines leaf out and the fruitfulness of the buds.
Posted by The Vine House at 7:04 AM