Mildew Pressure - This is new!

So what would the nearly perfect year so far be without something coming up to rain on the party.  For the past 7 years we've barely had a stich of mildew and really no rot to speak of.  This is a function of a few factors that I can think of the main one being that we have utilized mildew resistant varieties.  The other reason is we have cool nights which slows mildew development and dry summers with low humidity.

This year is an exception in several respects.  First off the vinifera varieties of Pinot Noir and Zweigelt have fruit this year. Again they are responding to the soil amendments.  These varieties are prone to developing powdery mildew and downey mildew as well as bunch rot.  Next it has not been cool in the nights it has been very warm with high humidity.  The rain has been a bit above normal also.

As such the Pinot Noir is showing fungus mold on the bunches - not being too familiar with this I'm thinking its downey mildew based on how the vine bunches and leaves have been affected.  I clipped these clusters away. 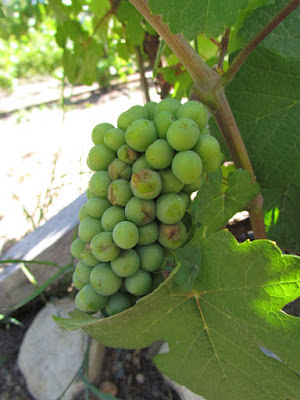 I've noticed slight mildew on one bunch of the Marechal Foch and one Evangeline also.
Posted by The Vine House at 6:50 PM