So the wine finished fermenting several weeks ago and now we wait for it to age, clear, and drop some acid.  Aging is literally a function of time and over time the wine changes - fruitiness gives way to more complex flavours, acidity subsides and wine becomes softer. This great for some wines and aging will bring them into their own but others that are meant to be light and fruity with acidity suffer. 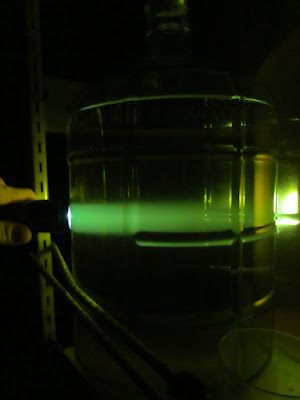 Also over time, usually just a few months, the suspended sediment drops out and settles on the bottom.  Some wine makers use clearing (fining) agent and filtering to clear wine of suspended sediment.  Others like to let nature and gravity do its work and the sediment will settle to the bottom in time and the wine will clear all on its own.  For wines that are not really meant to age, choosing to filter and/or using a clearing agent is often in order.  We usually just let gravity and time do its work but sometimes its hard to tell if the wine is clear.  The wine in the carboy may look completely clear and the sediment is settled on the bottom so you go and bottle the wine and three months later your opening up a bottle and see that there is a sediment film on the bottom.  It can be hard to tell just how clear the wine is but for whites at least you can do this little trick.  You simply shut the lights off and shine a narrow beam flashlight through the carboy (see above).  The light beam will pick up on all the suspended solids and you can readily see just how much sediment is still suspended.  If so, better leave the wine to settle out a little longer and keep checking each month till the sediment can barely be seen in the light beam. 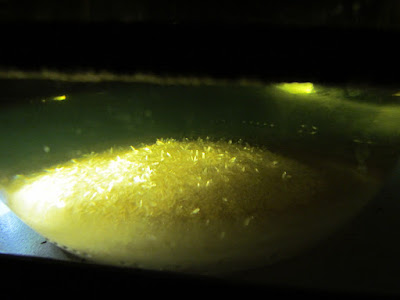 The other thing that time will do to wine is reduce the acid content.  This happens for a few reasons but what I have found is that the biggest drop in acid happens over the first 6 months as a result of oxidization of acid in the wine. So as we make the wine and pour it into carboys and rack it between carboys etc etc the exposure to the air adds oxygen to the wine.  The oxygen then combines and neutralizes some of the acid right away within the first few months. After that reduction of acid is slower and often involves more complex molecular changes to acid.  Another way that acid is reduced over time, quite quickly, is through cold stabilization.  With all wine, but especially cold climate wines, it is not uncommon to have high amounts of tartaric acid in the juice and resulting wine.  Cold stabilization is an excellent way of reducing the acid level and should be done regardless for most wines so that you don't get tartaric acid crystals (often called wine diamonds) forming in the wine after it has been bottled. While often called wine diamonds, which sounds nice, I really don't find it appealing to have these crystals come pouring out of the bottle with the last glass of wine.  So the cold stabilization process is literally putting the wine in a cold temperature area at about 0 degrees celcius for a bout 2-3 weeks.  During this time the tartaric acid will begin to form into crystal that will grow on the walls of the carboy or on the bottom of the carboy (see above) or they may even form and float on the surface of the wine and later fall to the bottom. Over the 2-3 week period you can see the crystals grow bigger and you are really seeing the acid dropping.  If you've ever seen those crystal growing kits that they sell in toy stores for kids, that is kind of what happens with the crystals growth in the carboy.
Posted by The Vine House at 7:22 PM