So following the warmest April ever and one of the warmest monthes of May we have returned to normal heat towards the end of June but even cooler now than normal going into July and for the forseeable future (next 2 weeks anyway).  While the temperature was fairly normal for June, the days were mostly cloudy and overcast - not alot of sunlight. 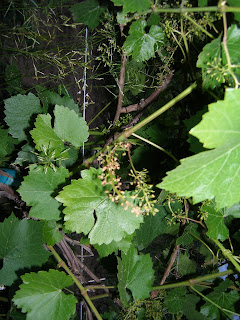 Environment Canada long range forecast still says we can expect above normal temperatures for July and August but if the next two weeks of cooler weather holds true than this will be one of the coolest July's since we started tracking temperature in 2008.

I was talking to vendors today and some of the more popular fungal sprays are going off the shelves pretty fast this season (like Serenade).  Apparently fungal pressure is pretty wide spread issue this year.

Also interesting is how the rain and cooler weather put the brakes on vine growth.  This year as of beginning of June the vines were at least a week ahead of where they were  in 2015 but by first week of July they are now about a week behind 2015 growth. Check out the link here to last year July 6 and look at the Evangeline photo compared to the Evangeline pictured this year here which have just finished flowering.