Every so often I see that some of the grapes that have dropped from the vine end up growing into vines. This is often how new varieties of grapes have emerged over the years.

Grape vines are of course the offspring of two different grapes types and the offspring carries genetic components from both parents. When breeding grape vines the breeders will have hundreds if not thousands of seedlings that emerge from crossing two grape vines. The grapes that result from the cross are then planted and those that grow are raised for a few years to see what genetic components they carry.

Each seed represents a different potential grape vine and often grapes from the same cluster on a vine will produce entirely different grape vines when the seeds grow into vines.

We often see small vines starting to grow under the established grape vines in a row. They usually dont amount to much as they are over taken by weeds or if they get too big we pull them out.

However, have a look at the small grape vines growing in the picture below, you can clearly see the difference in leaf colour for the seedlings growing side by side that have emerged.  These seedling came from grapes that fell off of the Marechal Jofffre vines - probably from the same cluster. 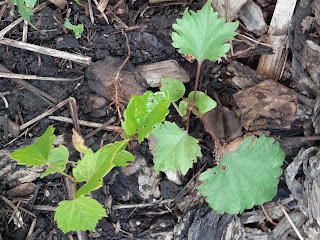 Marechal Joffre is a cross between 101-14 MGt and Goldriesling.  The genetic traits that these  sibling vines are showing already are very different. It would be interesting to see what type of grape they produce. Marechal Joffree is a blue grape but perhaps the grapes from one of these seedlings could be green. The Goldriesling is an old vinifera and if you could see the leaf tips of the light green vine it does have more of a vinifera appearance, however the leaves are less of a vinifera appearence.

We may keep a few of these around just to see what happens with them.
Posted by The Vine House at 9:57 PM