So since 2008 we've plowed between the rows to eliminate weeds and provide more soil moisture for the vines. The soil is both sandy and low in nutrients so it holds little moisture and provides little nutrients to the vines. Yet the vines grow, albiet slower than what one may expect and takes 6-7 years to reach full maturity.

Now that the vines are fully established we are seeding clover in ever second row. We started this last year and this spring it is coming up great and so now we are continuing with planting the clover in the rest of the vineyard. The clover will help to build the soil over the years yet it will consume alot of soil moisture. However now that the vines are mature with full and deep root systems they are less prone to soil water deficiency. In fact, over the past few years the vast majority of or vineyard has really not received any irrigation. 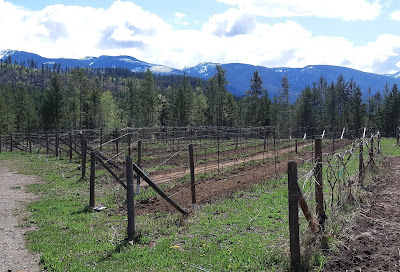 There are a few things at play here here that help us eliminate the need to irrigate.

The clover will consume some of that valuable moisture but now that the vines are mature they can handle these conditions without irrigation and the clover will serve well to build the soil over time and provides a great habitat for bees.