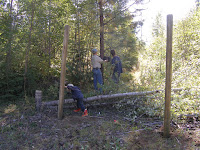 The year started off quite cool the last good frost was on May 9th at -1.7 c. The Leon Millot planted in fall of 2008 were budding out (full swell) on May 9/10th. Bud break was about May 14 (estimate about 7-10 days late). Flowering was June 28, about 7-10 days later than estimates for an average year (estimated time of flowering is June 18-21). April temperature average was 6c. We had temperature Averages of 12 for May, 17 for June, 20.2 for July and we're on track for a 19 - 19.5 average for August. Thats About 875 degree days since May 1st. If this year is like last and we have a decent September (Average of 13) then we're looking at about another 90 degree days, and likely another 20-30 or so in October before frost. Fall frost is expected in the second week of October but could easily come a week or two earlier. Hopefully we can record close to 1000 degree days (based on daily average) this year, again not bad. What I'm hoping for in September is the high daily heat and cool nights we had last year. The September 2008, day time average high was 21 c and the nights averaged 5 c. The monthly average was 13.

What has been difficult to assess is the rain fall. As we are not at the site all the time we miss the exact amounts due to evaporation. We do know the site got at least 2 inches in April and at least 2 in May. June had 1-2 inches and July and August each had at least 1 inch. So far that is 7-8 inches I've recorded but in talking to some that live there all the time they say there was 3 inches in May and 2 inches in June. So it is possible the site has had 9-10 inches of rain this year to date. Any way you look at it the rain fall has been ok and based on the growth of the unirrigated Leon Millot it has been enough for this year.

I've put wire tents around the grape vines that have clusters so that the birds don't get to them. Will start testing the brix in mid September but will only do two tests a week apart as I expect I'll run out of berries pretty quick with the few clusters I have.
Posted by The Vine House at 1:15 PM