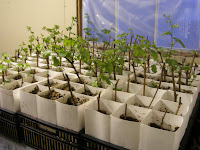 We looked for varieties that are easy to grow, relatively cold hardy, would consistently ripen in our climate and would make nice wine. In particular we were looking for vines that were disease resistant. So we have come up with a group of varieties that fit these parameters well and some that don't fit all the parameters.

Those that are relatively disease resistant, cold hardy, and should ripen consistently (900-1000 degree days and 150 frost free days):
Leon Millot ( http://viticulture.hort.iastate.edu/cultivars/Leon%20Millot.pdf )
Ravat 34 ( http://viticulture.hort.iastate.edu/cultivars/Ravat%2034.pdf ) and
Castel 19637 ( http://www.aberfoyle.org/castel.html ) and Acadie Blanc and Regent (regent is a bit less cold hardy). There is also some great new varieties that have been developed at the Kentville Research Station in Nova Scotia that have fairly good cold hardiness, some disease resistance and are early to very-early ripening. These would appear to suit our site quite well and we will try to get some of these.

In terms of wine from these, our favourite is Castel. It is hard to find but the ones we have tried as varietal are fantastic. Domaine De Grande Pre (Nova Scotia) Castel reserve and Gaspereau Vineyard (Nova Scotia)  Castel are worth getting your hands on if you can. Cherry Point on Vancouver Island makes one as well but I haven't tried it as yet.

Others varieties we're trying out that should ripen but are less cold hardy and have lower disease resistance are: Agria, Ortega, Seigerrebe, and Perle of Csaba.

Then there are those that are less cold hardy, lower disease resistance and are believed to be marginal in terms of ripening in our climate: Zweigelt, and Pinot Noir 115.

We don't have all of these varieties as yet, we have more on order for the spring of 2010.
Last fall we planted the first vines. This was three Leon Millot vines which had been grown from cuttings in pots then transplanted in the fall to the ground. This spring we planted another 25 Leon Millot, 15 Ravat, and 8 ortega.

Later in the summer we planted 18 Agria, 15 Regent, and 8 Pinot Noir to go in late summer.

THE GOOD NEWS
The three Leon Millot vines planted last fall (September 15th) were literally planted in holes and given 1 litre of water. They survived the winter and have about 7-8 feet of growth this year. The good part here is that they were given no fertilizer or IRRIGATION this year. Two of the vines have grape clusters that flowered June 25th (I think this is about a week late as this 2009 is a colder spring than 2008). I kept them on the vines to check ripening dates, brix, ph. and acid and I'm expecting/hoping them to be ripe about September 25th.

The other Leon Millot and Ravat (both planted spring 2009) are irrigated and fertilized enough to ensure they don't dry out and they are also averaging about 7-8 feet of growth. However 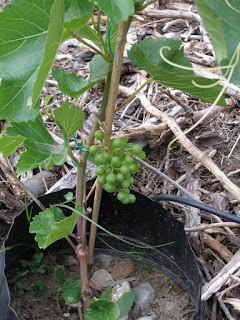 there were only a few clusters on the whole lot of LM or Ravat. The Ravat 34 clusters look very nice.

Only 5 of 8 Ortega (planted spring 2009) survived the spring and they are only about 3-4 feet tall, but they were week vines to start with.

The Agria and Regent were planted at the end of June 2009 and are between 2 and 4 feet high. I believe the difference in growth in the LM and Ravat vs the Regent and Agria is in the fertilizer as LM and Ravat got liquid stuff and the others got granular. There is one Agria plant that had a cluster on it that I was unaware of until August 9th when I saw it. I thought I had pinched off all the cluters but obviously missed this one. The cluster was already turning colour but its a bit earlier than it should be as it got started indoors and the berries are very small. I'm leaving it on anyway and will test it in September.

The Pinot Noir is going to be planted in September.
Posted by The Vine House at 8:38 AM